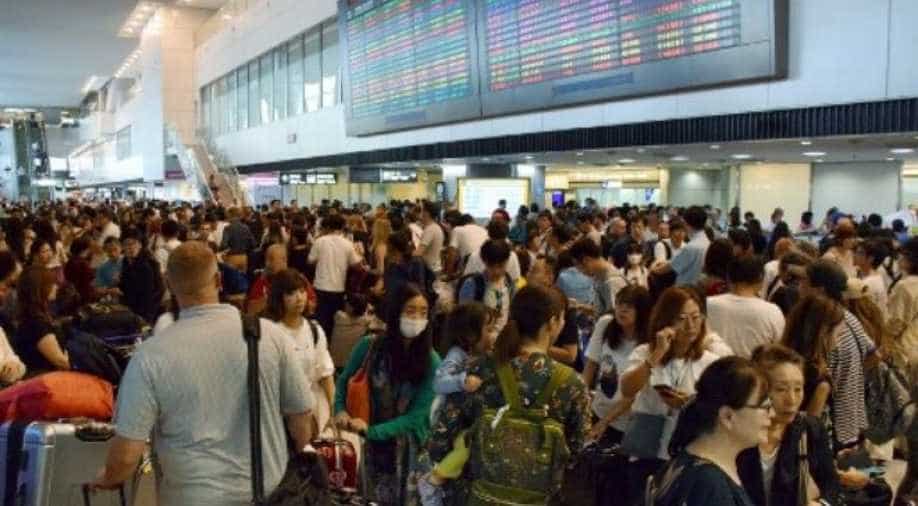 The typhoon caused more than 100 flights to be scrapped and road and rail links to the airport were also badly affected, leaving many with no transport options to the city 70 kilometers (45 miles) to the west.

Around 17,000 passengers were stranded overnight at Tokyo's Narita Airport, an official said Tuesday, after it took a direct hit from a powerful typhoon that caused transport chaos throughout the capital.

The typhoon caused more than 100 flights to be scrapped and road and rail links to the airport were also badly affected, leaving many with no transport options to the city 70 kilometers (45 miles) to the west.

Airport spokesman Kei Miyahara told AFP that a total of 16,900 were stuck at the airport at midnight.

"Passengers are now beginning to go home or to their final destinations as buses and trains have resumed operations," Miyahara said early Tuesday.

Narita Airport, located in Chiba to the east of Tokyo, was right in the line of fire of Typhoon Faxai, which brought winds of up to 207 kilometers (129 miles) per hour.

Suburban trains throughout the huge Tokyo metropolitan area were not reopened until 8 am on Monday as officials checked for debris and damage. This sparked pandemonium during the notoriously busy morning commute.

The chaos came as Japan is preparing to host the Rugby World Cup later this month and with the 2020 Tokyo Olympics just around the corner.

There was a "minor" disruption to some teams' schedules, admitted a Rugby World Cup spokesman, with Australia's arrival delayed and the England team, stuck for hours at the airport.

They passed the time in a particularly English way by playing cricket.

"We delivered information in English and Japanese on digital signs, and made announcements in four languages" including Chinese and Korean, said Miyahara.

However, there was mass frustration and passengers complained about a lack of information and long queues for taxis.

The airport operator will review their experiences and draw lessons later, Miyahara said.