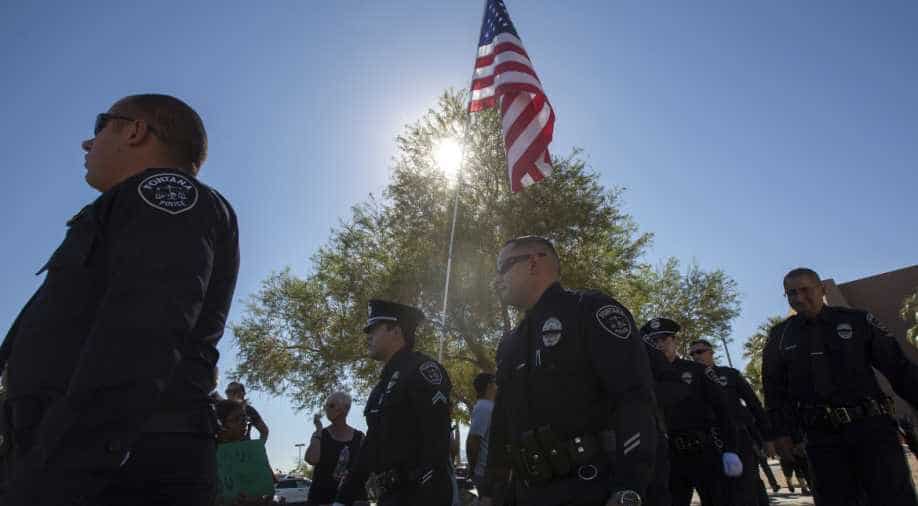 Two police officers were killed in a pair of "ambush-style" shootings around Des Moines, Iowa, early on Wednesday morning, and police are searching for a possible suspect, whose motives were unknown.

Police are searching for a local man named Scott Michael Greene, 46, who should be considered armed and dangerous, TV station KCCI reported. It is necessary to mention, given the topic of police shootings in America, that the suspect is a white male.

"These officers were ambushed," Des Moines police department spokesman Paul Parizek told a news conference, adding that they were shot while sitting in their patrol cars about 3 kilometres apart. "There is a clear and present danger to police officers right now," he said.

Police shootings, both those by citizens targetting police and those committed by police, is a sensitive topic in America. It has been put into the spotlight by groups like Black Lives Matter (BLM). Often, when a tragedy like this unfolds it gets almost instantly politicised and some link is made to BLM, even if they had absolutely nothing to do with it.

The extreme conservative Rudy Guiliani wasted no time blaming these murders, in so many words, on the atmosphere created by BLM ("it wasn't an isolated incident") while speaking to the Westside Conservative Club.

Note that Guliani's suggestion comes despite he himself saying, "we don't know what the circumstances of this shooting are so I'm not going to say much about that".

A witness told Reuters that a police cruiser at the site of the Des Moines shooting was riddled with three bullet holes. Police were conducting a manhunt for the suspect or suspects throughout the area, Parizek said.

There are two YouTube videos posted by Scott Greene, an Iowan resident who appears to fit the description of the man named as the suspect wanted by police.

In the first video, entitled, "Police Abuse, Civil Rights Violation at Urbandale High School", Greene records himself being asked by two cops to exit school property. "Have I committed a crime?" he asks. He says "I think I've been assaulted by you", and claims he was grabbed and shoved. He tells a third officer that he wants to report the theft of a flag taken from him, and that he wants to press charges against someone who hit him from behind while he was in the stands.

In the second YouTube video -- which is really a 10 second still, essentially a picture -- a man is seen holding a Confederate Flag, a loaded symbol in the US. While it can be an innocent symbol of the American South, it is also esteemed by various white supremacist groups.

"An attack on public safety officers is an attack on the public safety of all Iowans," Ben Hammes, a spokesman for Governor Terry Branstand, said in a statement. "We call on Iowans to support our law enforcement officials in bringing this suspect to justice."