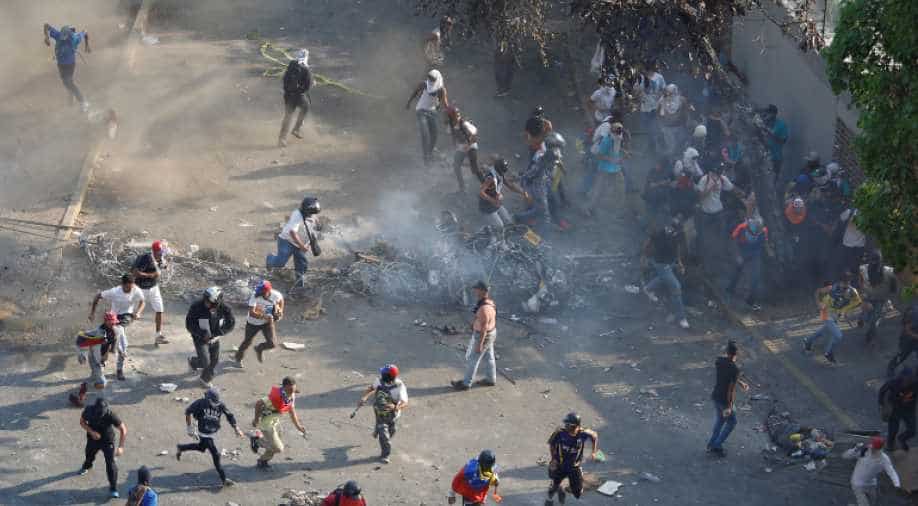 Demonstrators are seen during clashes with security forces following a rally against the government of Venezuela's President Nicolas Maduro and to commemorate May Day in Caracas Venezuela. Photograph:( Reuters )

Two more opposition demonstrators, both minors, have died from injuries sustained in clashes with Venezuelan security forces, the opposition said Thursday, bringing the death toll in two days of unrest to four.

Two more opposition demonstrators, both minors, have died from injuries sustained in clashes with Venezuelan security forces, the opposition said Thursday, bringing the death toll in two days of unrest to four.

A 14-year-old, Yoifre Hernandez, died after being hit by gunfire during May Day clashes in Caracas, lawmakers and family members said.

They said the other youth, Yosner Graterol, 16, died after he was shot during unrest in the northern town of La Victoria on Tuesday.

The clashes followed a failed uprising Tuesday by a group of military personnel rallied by opposition leader Juan Guaido, who is recognized as interim president by more than 50 countries.

Tensions in Venezuela have soared since Guaido, who heads the National Assembly legislature, invoked the constitution to declare himself acting president on January 23, claiming Maduro's re-election last year was illegitimate.

National Guard troops fired tear gas at stone-throwing protesters attempting to block a highway close to the airbase in eastern Caracas where Guaido had tried on Tuesday to spark a military uprising.

Guaido rallied his supporters in Caracas in the Labor Day demonstrations, urging them to stay in the streets.

His appeal came despite the apparent failure the day before of a revolt by some soldiers and members of the Bolivarian National Guard who joined his side.

In Tuesday's clashes, one person was killed and dozens injured, according to human rights monitors. More than 150 people were arrested, the government and human rights organisations said.

A million deaths due to coronavirus a 'very sad milestone': World Health Organization