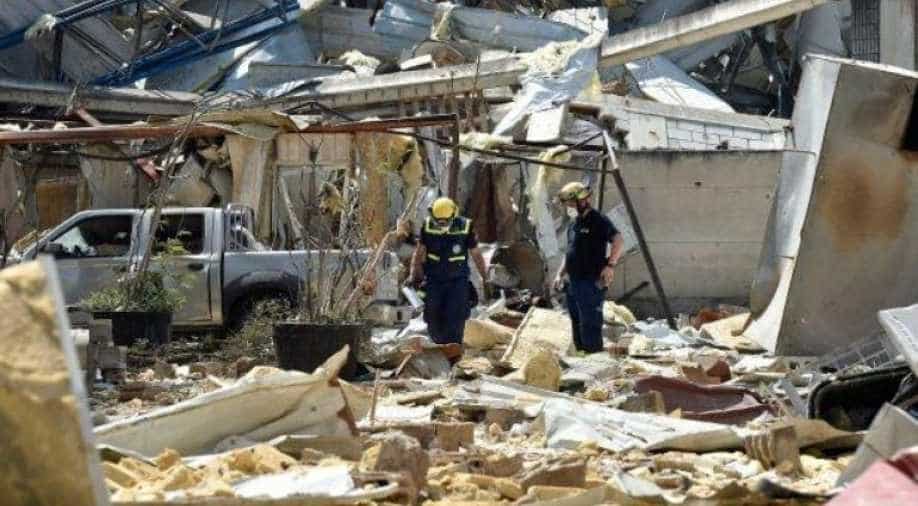 Members of rescue team search for bodies and survivors amid the rubble three days after the explosion in Beirut Photograph:( AFP )

The death of one French victim, prominent Lebanon-based architect Jean-Marc Bonfils, had already been confirmed but the second victim has yet to be publicly identified.

France has stepped up its probe into the massive Beirut port blast last week by handing it to investigating magistrates, prosecution sources said Friday, as it was confirmed two French citizens were among the 171 people killed.

The investigation has now been entrusted to two magistrates who can ultimately decide whether to press charges over the August 4 blast, a source in the office of the Paris prosecutor told AFP.

Another source, who asked not to be named, said two French citizens were now confirmed to have been killed in the explosion.

Also read: After blasts, protesters in Beirut want France to intervene in Lebanon

The death of one French victim, prominent Lebanon-based architect Jean-Marc Bonfils, had already been confirmed but the second victim has yet to be publicly identified.

French prosecutors on August 5 opened a probe into "involuntary injury" using their jurisdiction to investigate acts committed abroad when French people are among the victims.

Investigators and police from France have already been at the scene in Beirut for several days to reconstruct the chain of events that led to the explosion.

The FBI will also join Lebanese investigators at the invitation of the Lebanese government, the US State Department said Thursday.

The explosion has been blamed on a vast stock of ammonium nitrate left for years in a warehouse at the port despite repeated warnings.

Lebanese authorities have pledged a swift investigation and judicial officials said Wednesday the prosecution would question ministers and former ministers.

President Michel Aoun has rejected calls from world leaders, including French President Emmanuel Macron, and many Lebanese for an independent international investigation as a "waste of time."