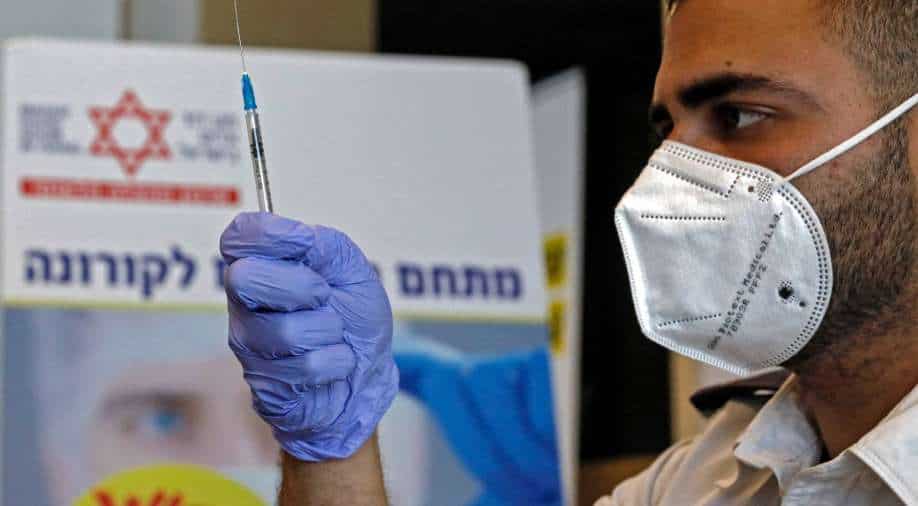 Out of a population of 9.4 million, 5.7 million Israelis have received two vaccine doses Photograph:( AFP )

The health expert also stressed that the children need to be vaccinated as quickly as possible, but lamented the slow pace of the vaccination rate in Israel

As the Omicron variant of COVID-19 spreads rapidly around the world, there has been intense debate on the need to take a third dose or a booster shot for extra protection against the deadly virus.

Even as some countries deliberate and study the necessity of a booster dose, Israel's healthcare expert Prof Jonathan Halevy told WION on Thursday asserted that an additional Covid jab was imperative for strong protection.

“People who are double vaccinated, after a gap of 6 months following the second dose are considered to be unvaccinated. So, it only calls for the necessity to take a booster shot. Actually, the level of immunity goes down below protection level on the average in six months after the second vaccination, though it differs from person to person,” Halevy said.

When asked whether there has been any progress in treating Covid illness, Halevy said, “As far as medications go, I believe that we are now in a much better shape compared to the year-and-a-half ago when the virus started. We now have an arsenal of medications and among them are Pfizer and Moderna vaccinations. If God forbid we have a fifth wave, we can treat the patients much earlier and efficaciously.”

The health expert also stressed that the children need to be vaccinated as quickly as possible, but lamented the slow pace of the vaccination rate in Israel.

Also read | Why Omicron was first found in San Francisco

When asked whether it was possible to implement a national mandate making vaccines compulsory in Israel, as suggested by the country’s coronavirus czar Salman Zarka, Halevy pointed out that such orders won’t be passed in Israel.

“I don’t believe it will happen in Israel, as it is a very vivid democracy with a very meticulous approach to human rights. So, I think that coming out with a law to mandate vaccination for everyone will not happen in Israel. But I think sanctions or penalties should be given,” he said.

Out of a population of 9.4 million, 5.7 million Israelis have received two vaccine doses, and 4 million have had a third booster shot, according to Israel's health ministry data.

Israel rolled out vaccinations for children aged five to 11 last week, one of only a handful of countries to inoculate minors that young.