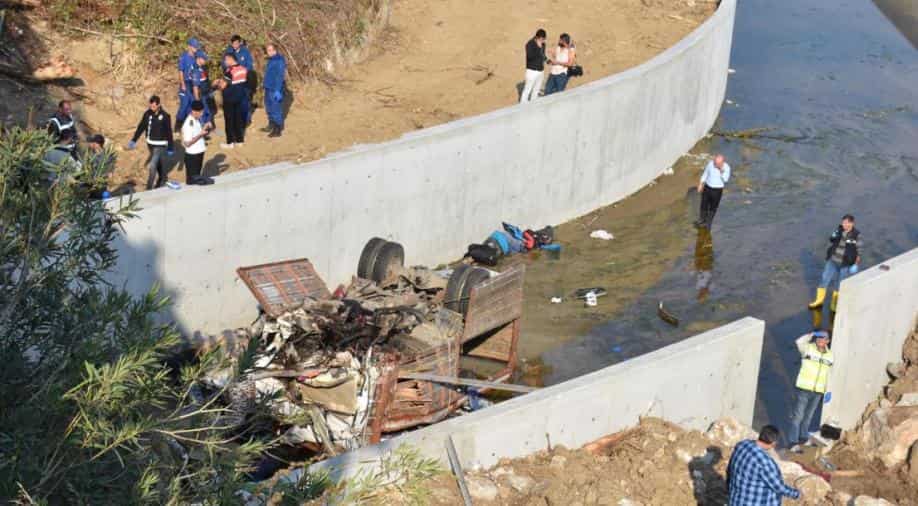 Thirteen people were injured and taken by ambulance to nearby hospitals.

Twenty-two people, including children, were killed when a truck carrying migrants crashed in the western Turkish province of Izmir on Sunday, the state-owned Anadolu news agency reported.

The mangled wreckage of the open-topped truck lay toppled over in a canal, some 20 metres below a highway from which it apparently fell after crashing through a barrier, video and photos published by Anadolu showed.

Thirteen people were injured and taken by ambulance to nearby hospitals, it said.

A state prosecutor has launched an investigation into the crash and the truck driver could face arrest after hospital treatment, it added.

According to the private Demiroren news agency (DHA), the truck's passengers were foreign migrants who had reached a deal with traffickers to be transported by boat to the Greek island of Samos south of Izmir.

Nine of those injured were children, DHA said. It was not clear where the migrants were from.

Turkey became one of the main launch points for more than a million migrants taking the sea route to EU countries in 2015, many fleeing conflict and poverty in the Middle East and Africa.

The influx of migrants was drastically curtailed by a 2016 accord between Ankara and the EU, after hundreds died crossing to Greek islands a few miles off Turkey.

The truck driver lost control of the vehicle and it crashed at around 8 am (0500 GMT) in the Gaziemir district, near the airport south of Izmir city, DHA said.

A CNN Turk correspondent at the scene said emergency workers had worked to retrieve the dead and wounded trapped beneath the truck.