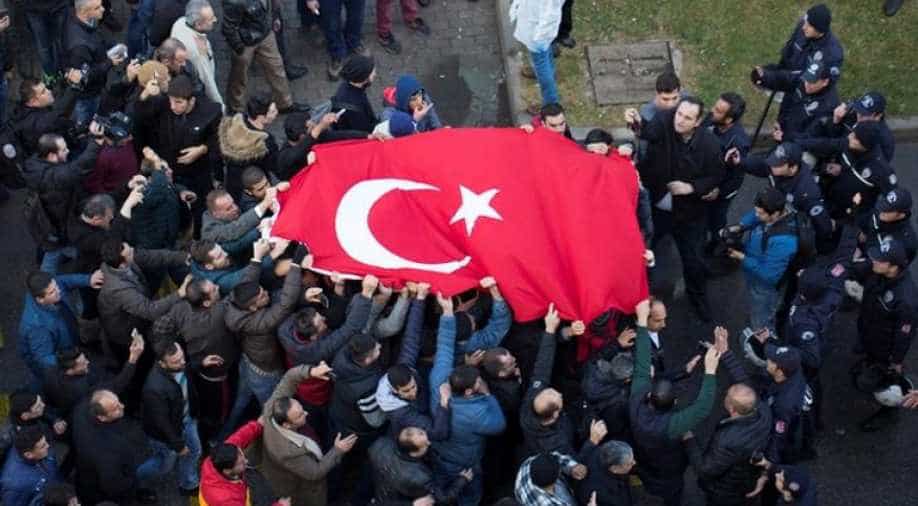 Turkish police shot dead two attackers and were searching for a third after a car bomb exploded outside a courthouse in the Aegean coastal city of Izmir on Thursday, state media and local officials said.

The bomb killed a police officer and a courthouse employee, according to a police source. At least 10 others were wounded.

Ambulances arrive at the scene after the explosion. (Reuters)

A security source told Reuters police had shot dead two attackers following the blast, and the state-run Anadolu news agency said they were searching for a third. Hospital sources said ten people had been brought in wounded.

The bombing comes less than a week after a gunman shot dead 39 people at a nightclub in Istanbul on New Year's Day in an attack claimed by Islamic State. The gunman is still at large.

Turkey faces multiple security threats. It has been hit by a series of bombings over the past 18 months. (Reuters)

Police detained 20 suspected Islamic State militants thought to be of Central Asian and North African origin in Izmir on Wednesday, in raids Turkish media said were linked to the Istanbul nightclub attack.

"Initial evidence suggests the PKK was behind the attack," Erol Ayyildiz said, referring to the outlawed Kurdistan Workers' Party waging an insurgency inside Turkey.

The PKK has not responded to WION for comment.