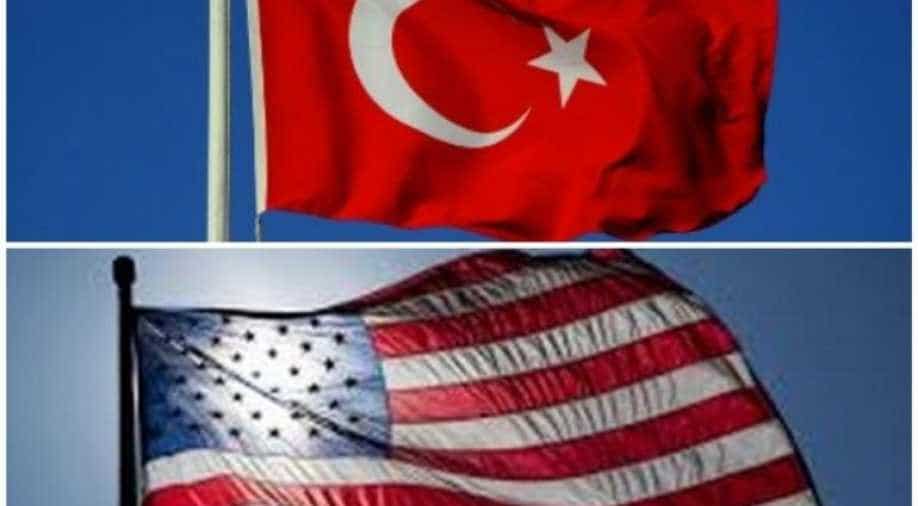 The US supports the militia as the main fighting force against the Islamic State group.

Turkish and US officials reached agreement Wednesday to establish a "joint operations centre" for northern Syria aimed at creating a safe zone to manage tensions between Turkey and a US-backed Kurdish militia.

Coming after three days of tense negotiations, the agreement contained no details on the size and nature of the safe zone, but appeared to provide some breathing room after Turkey had threatened an imminent attack on the Kurdish YPG group which controls large swathes of northern Syria.

Turkey sees the YPG as a terrorist offshoot of the Kurdish PKK, which has fought a bloody insurgency inside its territory for the past 35 years.

The US, however, supports the militia as the main fighting force against the Islamic State group.

The defence ministry said in a statement that Ankara had agreed with US officials to "implement without delay the first measures aimed at eliminating Turkey's concerns.

"In that framework, to quickly create in Turkey a joint operation centre to coordinate and manage the implementation of the safe zone with the US."

President Recep Tayyip Erdogan said the talks had gone in "a positive direction".

He refused to give a date on when the joint operation centre would be established nor provide details about the safe zone.

But he said the agreement showed Turkey's resolve to intervene "east of the Euphrates" was "now being done with the Americans."

The three-point agreement described the planned safe zone as a "peace corridor" that can "ensure that our Syrian brothers will be able to return to their country".

Turkey has the highest number of Syrian refugees in the world at more than 3.6 million and has faced increasing pressure domestically to speed up repatriations to peaceful parts of the country.

All sides agree that a buffer zone is needed to keep the YPG away from Turkey's borders, but they have differed on how large it should be, or who should control it.

The talks came at a delicate moment between Turkey and the US, who have grown increasingly estranged over a number of issues, including American support for the Kurds and Turkey's decision to buy a Russian S-400 missile defence system.

It is also a tricky moment for Erdogan domestically after his party lost control of Istanbul and Ankara in municipal elections this year, and has seen high-profile defections.

"He needed to show he was both tough for Turkish security and willing to relieve the pressure on Turkey from millions of refugees. This led him toward a credible threat to invade Syria unilaterally," Nicholas Heras, an analyst at the Center for a New American Security, told AFP.

"The US has started a process to give Erdogan a chaperoned presence east of the Euphrates, and the managed resettlement of some refugees."

Heras said the goal for the US was to prevent the destruction of the Syrian Democratic Forces, of which the YPG is the leading force, to ensure it remains the dominant player in northern and eastern Syria.

Erdogan warned in recent days that patience was running out with the Americans to find a solution in northern Syria.

"Turkey has the right to eliminate all threats against its national security," he said in a televised speech on Tuesday.

US Defence Secretary Mark Esper countered that any unilateral action by Turkey would be "unacceptable".

But by the third day of talks, his Turkish counterpart, Defence Minister Hulusi Akar, said there were positive signs.

"We witnessed with satisfaction that our partners grew closer to our position. We would prefer to act together with our American ally. If that isn't possible we have said multiple times that we will do what is necessary," he told the state-run Anadolu news agency.

Turkey has twice carried out unilateral offensives into northern Syria against the Islamic State group and YPG, in 2016 and 2018 respectively.