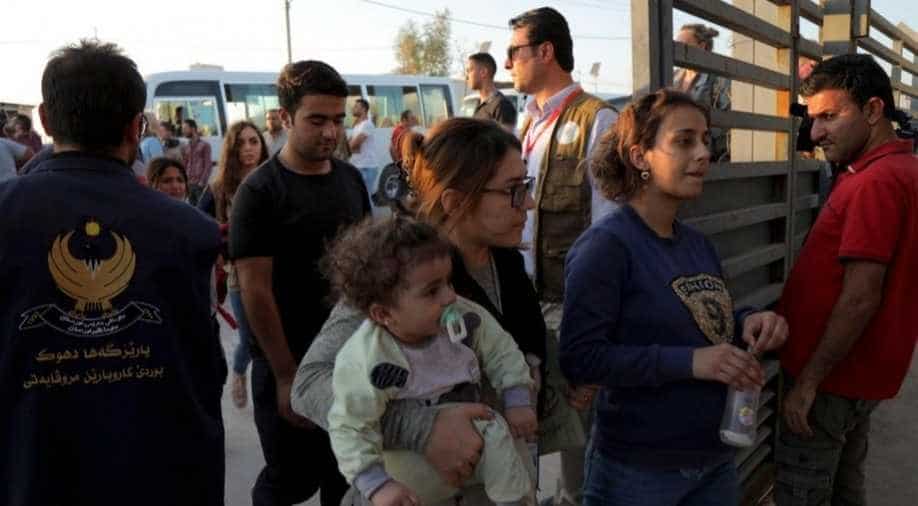 'More than 300,000 civilians have been displaced since the start of the offensive,' Rami Abdel Rahman, head of the Syrian Observatory for Human Rights, said.

"More than 300,000 civilians have been displaced since the start of the offensive," Rami Abdel Rahman, head of the Syrian Observatory for Human Rights, said.

He said the jump in the number of people forced to flee was due to a fresh wave of displacement over the past few days from areas around Tal Abyad and Kobane and in Hasakeh province.

Most displaced people tried to move in with relatives in safer areas, some were sleeping rough in orchards and others in some of the 40 schools that have been turned into emergency shelters, Abdel Rahman said.

Turkey and its Syrian proxies launched a broad assault on Kurdish-controlled areas on October 9, after US troops pulled back from the border and started withdrawing from the northeast altogether.

Dozens of civilians -- mostly on the Kurdish side -- have been killed since the start of the offensive, which Turkish President Recep Tayyip Erdogan has refused to halt despite mounting international pressure.

Meanwhile, Turkish troops and their Syrian proxies gained ground in Ras al-Ain, a key border town where Kurdish fighters had been putting up stiff resistance, a war monitor said.

"There have been intensive airstrikes on Ras al-Ain over the past three days," Rahman said.

Turkish forces and the mostly Arab and Turkmen former rebels they use as a ground force had "taken about half of the town" by Thursday morning, he said.

Massively outgunned by the Turkish army and its airforce, Kurdish fighters from the Syrian Democratic Forces (SDF) quickly lost a long stretch of border when the assault was launched on October 9.

They organised a defence of Ras al-Ain however with a dense network of tunnels, berms and trenches that held off Turkish forces and their proxies for about a week.

An AFP correspondent on the Turkish side of the Ras al-Ain front line said the sound of gunfire and blasts from artillery and airstrikes was constant.

Turkey wants to create a 30-kilometre-deep buffer on the Syrian side of the border to keep Kurdish militias at bay and set up a resettlement zone for some of the 3.6 million Syrian refugees living on its soil.