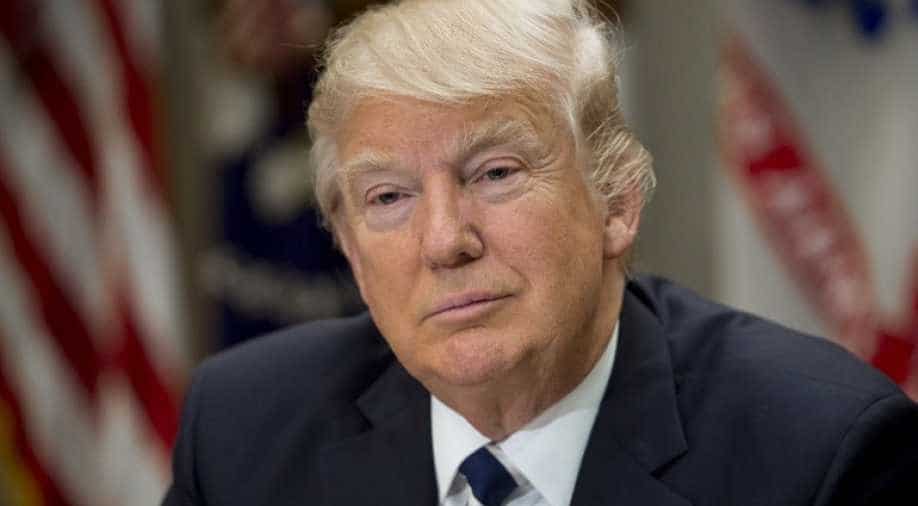 US intelligence agencies said phone records and intercepted calls showed the Trump campaign team had been in repeated contact with Russian officials in the year before the election. Photograph:( AFP )

What exactly does it mean that Trump's pick to head national security, Michael Flynn, resigned only 24 days into his tenure amid the revelation that he discussed US sanctions against Russia with the Russian ambassador, then lied about it not just to the general public but to America's Vice President?

Russia interfered with the US election to benefit Trump, and the New York Times just reported that Trump's team was in contact with Russian officials for at least a year before the election. Did Trump himself collude with Russia directly?

This is not confirmed, but the optics are bad and Trump is desperately trying to switch focus.

Who knew what, and when, and what their legal obligation was is important. Trump knew "for weeks" that Flynn misled the White House about Russia, and only acted on it after this knowledge entered the public domain. Why not act sooner?

This story is far from over, and there are already signs of major fissures.

The Wall Street Journal reported that the US intelligence agencies are not disclosing all they know to the president because they don't trust him. The White House responded: "There is nothing that leads us to believe that this is an accurate account of what is actually happening". But how could the White House possibly know what they aren't being told? Either US intelligence isn't telling the president all they know (likely), or they are lying and going public about concealing information from the president in a way that amounts to taunting the president (unlikely). Something is going on.

After all, Flynn is the third person from Trump's team to resign amid being connected to Russia. Earlier this summer, Paul Manafort was quietly pushed aside after it came to light that he lobbied for Putin-ally and pro-Ukraine lobbyist, Viktor Yanukovych. Carter Page was sacked after his connections to Russia became known. Trump has surrounded himself with people linked to Russia (Tillerson, Secretary of State, awarded the Order of Friendship by Putin himself, is a standout). But Flynn was the national security adviser.

There is a reason the final and most important chapter of Sun Tzu's Art of War is about the special role of spies, the army's most important function. "Upon them depends an army's ability to move." Every decision must be grounded in the best knowledge of all circumstances; That it's bad to have the head of America's national security controlled by the leader of Russia should be agreed upon by Democras and Republicans.

Yet Repulicans are keeping mostly quiet, preferring to remain in long-sought for power than expose their president for his Russia connection. US intelligence appears to be making the stand Republicans won't.

But putting faith in US intelligence services to tell the truth is highly dangerous for the simple reason that they lie frequently, as it's inevitable when a main part of your job is performing covert operations. The relationship between US intelligence agencies and Donald Trump is not easy to decipher. While it seems like a war on the surface, there is much unknown. The spy agencies by definition are privy to much deeper knowledge than the public.

Speculation is endlessly tempting, but caution here is prudent. Remember, FBI director James Comey days before the US election announced that he was reopening the investigation into Clinton's emails, despite being aware at the time of the Steele dossier. Many things determined the outcome of the election, but this huge last minute swung had an large and undeniable role. Why did the FBI announce one and not the other?

Trump put into perspective by ex-CIA

While it's wise to refrain from speculating about what is by definition secret, the tongue lashings coming from the US intelligence community are anything but subtle. Glenn Carle, a 23-year veteran of the CIA, expressed in no uncertain terms what a threat Trump poses in an interview with Vox conducted amid the news that General Flynn had resigned:

"We are facing the gravest threat to our institutions and our government since 1861, since the country broke in half. This is a graver crisis than Watergate, which was about corruption, not the usurpation of our laws and our checks and balances. It's graver than World War II, when Hitler never actually threatened our institutions or occupation of Washington...We're dealing with a man in Trump who doesn't accept a fact-based reality, who only acts for his own self-aggrandizement, and who views any action that does not serve him as a threat that must be destroyed. And, on top of that, his team appears to have been colluding with Russian intelligence services."

Notice his use of the word appears. Without a smoking gun linking Trump to Putin, that's all it is.

There is no smoking gun, but looking for one when there is so much around isn't unreasonable

Trump has repeatedly denied knowing Putin, but in video has claimed he does have a relationship with Putin.

Judge Sally Yates warned Trump that Flynn was vulnerable to Russian blackmail, and he fired her. Granted she also objected to the notoious Muslim ban, but perhaps he fired her for multiple reasons.

The notorious and unverified dossier compiled by former MI6 agent Christopher Steele alleging that Russia possesses embarassing blackmail material over Trump remains unverified, but it is part of an ongoing investigation. More, CNN published a report claiming that some aspects from the dossier have been corroborated. To be sure, some of what's in the dossier has been disproven, but if certain things in it are true, and are proven to be true, then the conversation becomes about treason and impeachment.

Trump has called the leaked documents "illegal", as if Trump didn't spend months using his unprecedented publicity machine to tell the world about leaks from Hillary Clinton's emails. Trump once, apparently, thought leaks were so fair game that he encouraged Russia to hack Clinton's email in the middle of a presidential debate.

Why oppose leaks now? Because Flynn didn't resign until leaks emerged. Given the sheer volume of connections between Russia and Trump, and an intelligence community who likely knows what is going on (about many things) and does not seem thrilled with the president, Trump going to fierce lengths to discredit leaks by emphasising their illegality makes sense. Leaks are working against him, now.

There are signs there may be more leaks yet. It's awfully hard to believe Trump's connection to Russia ends now that Flynn has been removed.