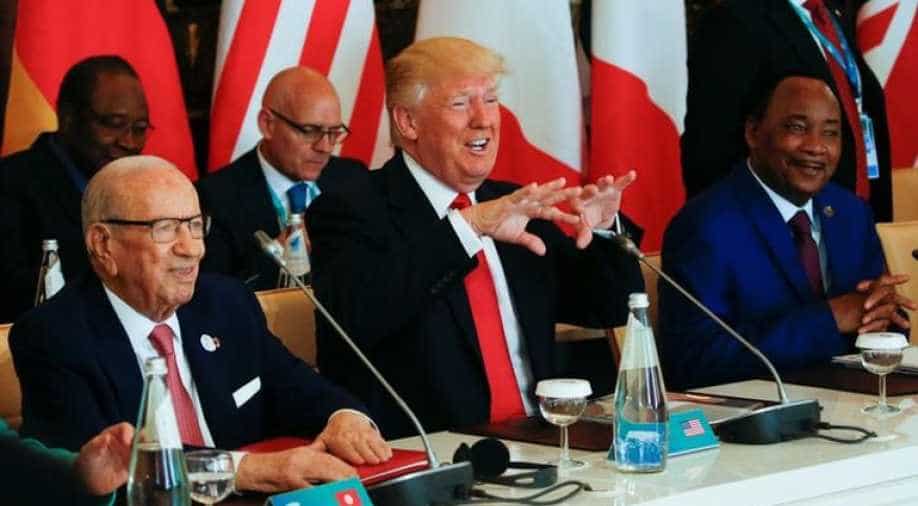 US President Trump gestures while flanked by Tunisia's President Essebsi (L) and Niger?s President Issoufou (R) at the G7 Summit session in Sicily on May 27. Photograph:( Reuters )

The US President Donald Trump has expressed his desire to host the delayed G7 Summit after the Presidential elections scheduled in November 2020.

The Group of Seven summit was to be held in June this year but the US President Donald Trump had decided to postpone it due to the ongoing pandemic, which had sent the world in a worldwide lockdown. Since then, trump has been unable to host the summit due to the surge in coronavirus cases, especially in the US.

However, Trump has now announced that he would like to host the summit in a "calmer atmosphere" after the November 3 presidential elections.

However, he has not given any conformation on whether or not Russian President Vladimir Putin will be invited to this summit, after he declared his intentions of extending invitations to Russia, India, South Korea and Australia.

"I don`t know but we have invited a number of people to the meeting. I certainly would invite him to the meeting," he said, adding that no date has been finalised yet, and therefore the invitations have not been sent out.

The invite as discussed between Trump and Putin over a phone call in June. Russia was once a part of the then-called G8 group, but was expelled in 2014 after annexing the Crimea region from Ukraine, and the name was changed to G7 — which includes the US, Germany, France, Britain, Italy, Japan and Canada.