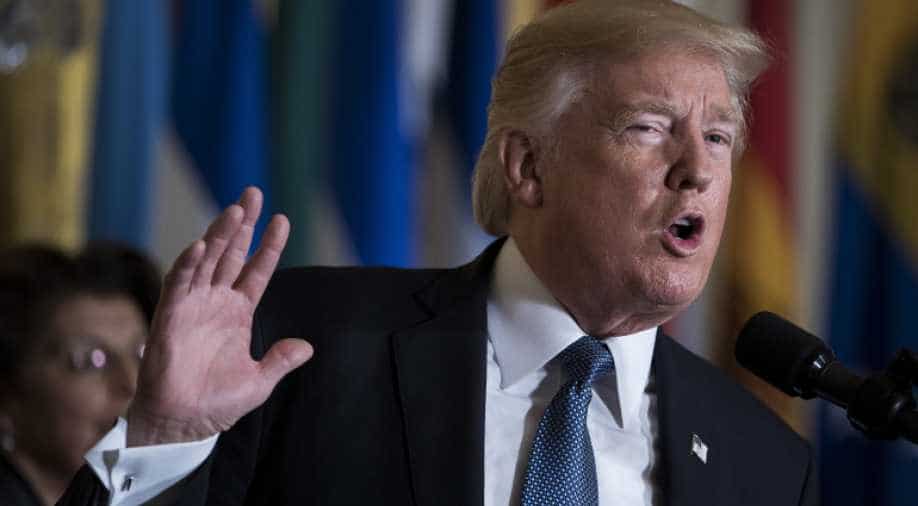 US President Donald Trump has sent a list of hard-line immigration principles to the Congress, proposing a point-based system for awarding green cards, preventing immigrants from sponsoring their extended families and speeding up deportations. Photograph:( AFP )

US President Donald Trump has sent a list of hard-line immigration principles to the Congress, proposing a point-based system for awarding green cards, preventing immigrants from sponsoring their extended families and speeding up deportations.

Besides overhauling the country's green-card system, Trump administration's wish list also includes the funding of a controversial border wall along the US-Mexico border and a crackdown on unaccompanied minors entering the country.

The move to establish a merit-based immigration system could benefit high-skilled Indian immigrants especially those from the IT sector. However, the new policies would badly impact those thousands of Indian Americans who want to bring in their family members to the US particularly their aged parents.

The demands were denounced by Democratic leaders in Congress who had hoped to forge a deal with Trump to protect younger immigrants, known as "dreamers", who were brought to the US illegally as children.

Trump last month announced plans to phase out the Deferred Action for Childhood Arrivals (DACA) programme, an Obama-era programme that had provided two-year work permits to the dreamers that Trump called "unconstitutional".

In his letter to the Congress last night, Trump demanded that these principles must be included as part of any legislation addressing the status of Deferred Action for Childhood Arrivals (DACA) recipients."Without these reforms, illegal immigration and chain migration, which severely and unfairly burden American workers and taxpayers, will continue without end," he asserted.

The administration proposes establishing a merit-based immigration system that protects US workers and taxpayers, and ending chain migration, to promote financial success and assimilation for newcomers, he said.

Ending extended-family chain migration by limiting family-based green cards to spouses and minor children and replace it with a merit-based system that prioritises skills and economic contributions over family connections.

He called for establishing a new point-based system for awarding the green cards (lawful permanent residents) based on factors that allow individuals to successfully assimilate and support themselves financially; eliminate the diversity visa lottery and limit the number of refugees to prevent abuse of the US Refugee Admissions Programme.

"The administration can't be serious about compromise or helping the Dreamers if they begin with a list that is anathema to the Dreamers, to the immigrant community and to the vast majority of Americans,? Pelosi and Schumer said in a joint statement?  "We told the president at our meeting that we were open to reasonable border security measures alongside the DREAM Act, but this list goes so far beyond what is reasonable. This proposal fails to represent any attempt at compromise," they said.

"The list includes the wall, which was explicitly ruled out of the negotiations. If the president was serious about protecting the Dreamers, his staff has not made a good faith effort to do so,? the statement said. US Attorney General Jeff Sessions, however, said that Trump has put forth a series of proposals that will restore the rule of law to the immigration system, prioritise America's safety and security, and end the lawlessness.

"These are reasonable proposals that will build on the early success of President Trump's leadership. This plan will work. If followed it will produce an immigration system with integrity and one in which we can take pride. Perhaps the best result will be that unlawful attempts to enter will continue their dramatic decline,? he said.

"Members of Congress of both parties who want to resolve the status of undocumented immigrant youth should recognise that these policies are a non-starter and get back to work on behalf of the vast majority of Americans who want to get something constructive done instead,? said Lorella Praeli, director of immigration policy and campaigns at the American Civil Liberties Union.

"They are a nonstarter. There is broad bipartisan support for a permanent solution for Dreamers without poison pills attached to it. We must not squander the potential of this generation of young people who will help write the next great chapter of American history," Werlin said.