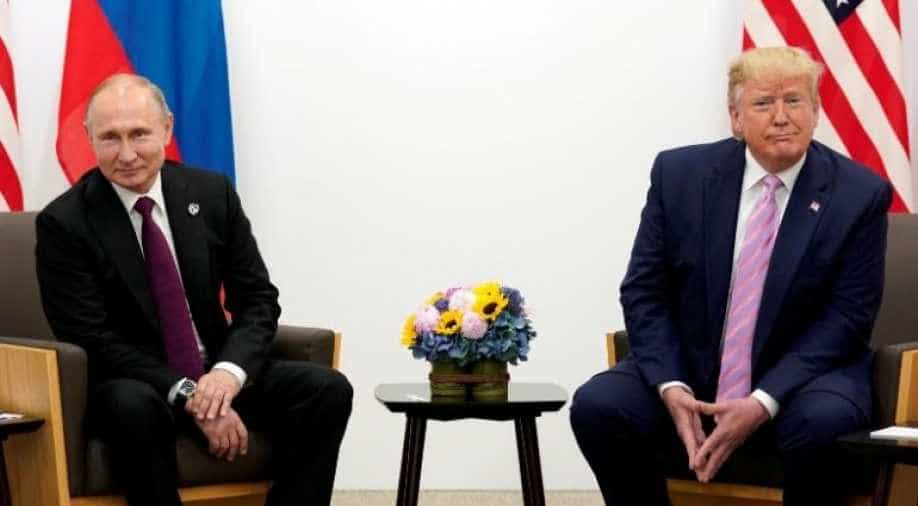 Asked why he did not confront Putin on the issue in their call last Thursday, Trump said, 'That was a phone call to discuss other things, and frankly that's an issue that many people said was fake news.'

Trump, who has sought to cultivate warmer relations with Moscow, has said he was not briefed on the matter before it emerged in news media in late June. He has called the reports a hoax and casts doubt on them. Russia has denied the reports.

"I have never discussed it with him," he told Axios in an interview. Trump talked by phone with Putin as recently as last Thursday.

In all, he has spoken with the Kremlin leader at least eight times since late February, when intelligence flagging alleged Russian bounties was included in the secret daily presidential briefing.

Asked why he did not confront Putin on the issue in their call last Thursday, Trump said, "That was a phone call to discuss other things, and frankly that's an issue that many people said was fake news."

He said he and the Russian president discussed nuclear nonproliferation in that phone call. As he left the White House later on Wednesday, Trump made clear he did not believe the report.

"If it were true, I'd be very angry about it. But if you tell me they're doing it, I would certainly take that under consideration," he said. "I would respond appropriately."

Trump is also dismissing reports that Russia is arming the Taliban, which has fought US-led forces in Afghanistan to a standstill and is now negotiating for their withdrawal.

The top US commander in the country in 2018, General John Nicholson, openly accused Moscow of supplying the Taliban, saying "we know that the Russians are involved."

After Trump's latest comments, White House director of strategic communications Alyssa Farah said the bounty reports "were based on unverified intel. But we still take it extremely seriously."

The safety of U.S. forces is the President’s top priority in Afghanistan.

The same intelligence, which was an unverified asssesment, was shared with Capitol Hill.

Democrats in Congress have accused Trump, a Republican who is seeking re-election in November, of not taking intelligence information concerning soldiers' deaths seriously enough. They have pressed for more information from the intelligence community and the White House.

Trump has been dogged by criticism that he was too friendly toward Moscow since taking office. The US intelligence community found that Russia interfered in the 2016 presidential election to boost his chances of winning the White House. Special Counsel Robert Mueller's report last year determined his campaign had numerous contacts with Russian officials but that there was not enough evidence to establish a criminal conspiracy.

National security adviser Robert O'Brien has said Trump was not verbally briefed on the Russian bounty intelligence because his CIA briefer concluded the reports were uncorroborated.

Trump has said many intelligence officials doubted the report's veracity, a stance contradicted by four U.S. and European sources and by its inclusion in a widely read CIA report in May.

The New York Times first reported in June that US intelligence had concluded that a Russian military intelligence unit had offered the Taliban payments of up to $100,000 for each US or allied soldier killed.