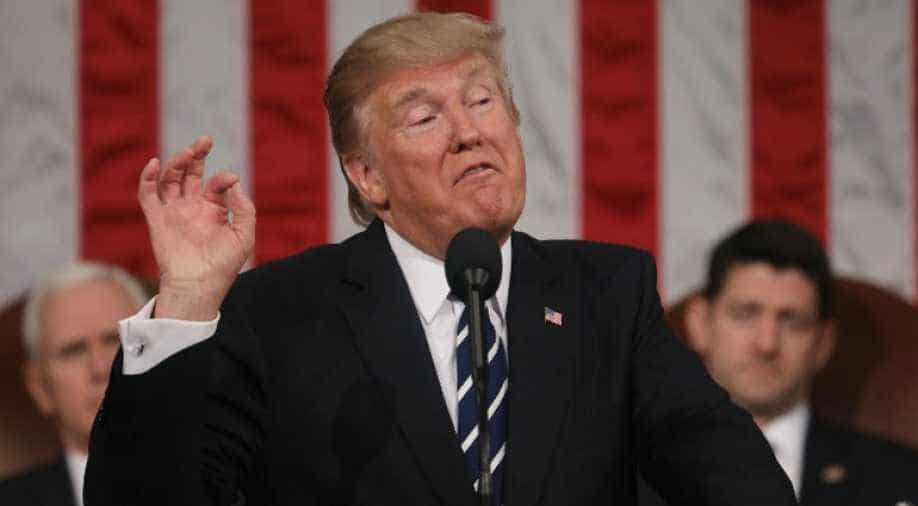 'By finally enforcing our immigration laws, we will raise wages, help the unemployed, save billions and billions of dollars, and make our communities safer for everyone,' he said. Photograph:( AFP )

Donald Trump pledged a "renewal of the American spirit" Tuesday, as he fleshed out his America-first agenda in a more measured presidential tone during a landmark speech to Congress.

Transposing hardline campaign promises into a presidential key, Trump offered the most restrained and detailed explanation yet of his America-first world view.

He criticized threats against Jewish community centres and condemned the seemingly racially-motivated killing of an Indian immigrant, answering calls for him to speak out.

And although the 70-year-old again promised a hard line on illegal immigration, he outlined his policies in less-inflammatory economic terms, winning sustained applause from the Republican-dominated Congress.

"By finally enforcing our immigration laws, we will raise wages, help the unemployed, save billions and billions of dollars, and make our communities safer for everyone," he said.

Putting some policy meat on the bones, he proposed introducing an Australian-style merit-based system to reduce the flow of unskilled workers -- and held out the prospect of a bipartisan compromise with Democrats on root-and-branch immigration reform.

But he also stood by his plan to subject travelers from certain countries to extreme vetting, insisting: "We cannot allow a beachhead of terrorism to form inside America."

His remarks were made amid expectations that a new executive order on immigration could be rolled out within the coming days.

Trump's initial attempt to bar the entry of visitors from seven Muslim-majority countries has been halted by the courts.

Hailing what he called the "new national pride" sweeping the country, he sought to use the pomp of the occasion and the presidential pulpit to reclaim authority and correct course after 40 difficult days.

Discussing trade, Trump even enlisted the help of Abraham Lincoln, echoing what the first Republican president described as "protective policy."

"Lincoln was right -- and it is time we heeded his words," Trump said. "I am not going to let America and its great companies and workers be taken advantage of anymore."

Looking abroad, Trump softened his criticism of NATO partners and vowed to work with allies in the Muslim world.

But he offered no apologies for emphasizing a world order centered on the nation state.

"But we know that America is better off when there is less conflict -- not more," he said, promising to "find new friends, and to forge new partnerships, where shared interests align."

Some women Democratic lawmakers had dressed in white for the occasion, a nod to the suffragette movement and an echo of the substantial opposition the president's policies face.

But Trump struck a compassionate tone at times, embracing family-friendly policies like paid parental leave, and even won cautious praise from Democrats for his call for unity.

"This was far less dark than the inaugural speech. And he has made an attempt to reach out," said Democrat John Larson of Connecticut. "But the devil is in the details."

According to a CNN instant poll, 57 percent of Americans who tuned in had a very positive reaction to the speech.

Pressing his domestic agenda -- and pleasing mainstream Republicans who reluctantly embraced him -- Trump promised to provide "massive" tax relief for the American middle class and to repeal his predecessor's landmark Obamacare health reform.

Now his challenge is translating that into tangible policy steps.

He outlined plans for rebuilding America's creaking infrastructure and for high-stakes tax and healthcare reform.

But on all three issues, Trump faces a difficult balancing act with fellow Republicans, who control both the Senate and House of Representatives.

To succeed, Trump -- the consummate political outsider -- may have to embrace Washington deal-making.

Conservatives are desperate to uproot Obamacare, but party pragmatists are wary of dismantling a system that helped some 20 million Americans obtain health insurance.

Tensions between the executive branch and the Republican-led Congress are also simmering over Trump's 2018 budget proposal.

Trump wants to hike defense spending by $54 billion, offsetting that with cuts in foreign assistance and other non-military spending.

On all these issues, Trump offered little detail about how to meet his promises without worsening the country's nearly $20 trillion national debt.

"This plan doesn't add up. A third-grade math student can see that you're going to blow a huge hole in the deficit if you do the things the president is talking about," Democratic Senator Chris Van Hollen told AFP.