Trump meets with Romney, no word on job offer 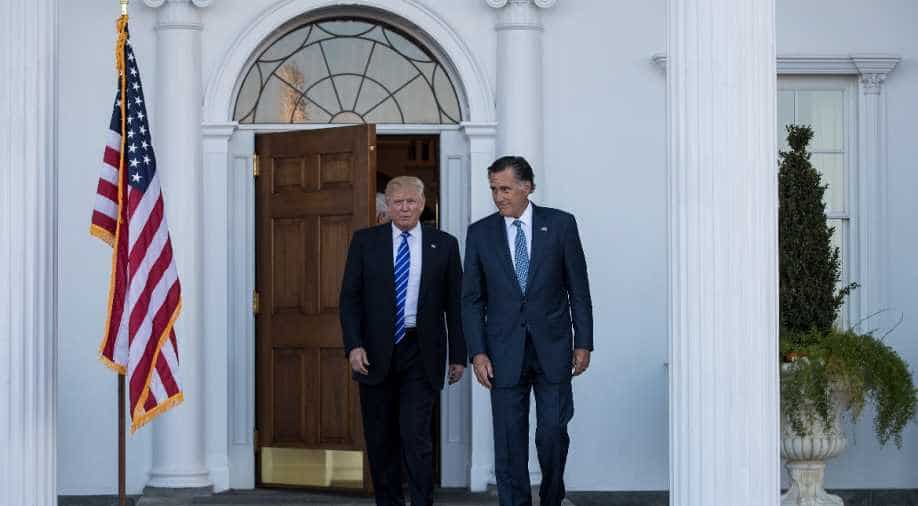 'We had a far-reaching conversation with regards to the various theatres in the world where there are interests of the United States of real significance,' Romney said after a 90-minute meeting. Photograph:( Getty )

Moderate US Republican Mitt Romney, known for his harsh criticism of Donald Trump during the campaign, said on Saturday he had a "far-reaching" conversation with the president-elect, who is believed to be sounding him out as a candidate for secretary of state.

Trump, who spent his first weekend outside Manhattan since his election, met for roughly 90 minutes with Romney, who emerged from the session saying nothing about whether he was offered the job or interested in it.

"We had a far-reaching conversation with regards to the various theatres in the world where there are interests of the United States of real significance," Romney said.

"We discussed those areas and exchanged our views on those topics."

Meeting at a Trump golf course in New Jersey, the president-elect sat down with Romney a day after naming three polarizing conservatives to fill key national security and judicial posts.

Romney took no questions and ignored a reporter who shouted to ask if he still considered Trump a "con man."

Earlier, as Romney walked toward reporters, Trump cupped his hands around his mouth and said of the meeting, "it went great." Romney was received warmly upon arrival, shaking hands with Trump and VP-elect Mike Pence.

With some 15 senior positions in his cabinet still to fill, the real estate billionaire decamped Friday night to the huge, exclusive Trump National Golf Club Bedminster, a one-and-a-half-hour drive from his Fifth Avenue headquarters at Trump Tower.

He will remain in Bedminster until Sunday night, far from the protesters besieging his New York building.

Trump has not appeared in public since he gave reporters the slip to take his family to dinner in New York on Tuesday. He has not spoken publicly since the broadcast of an interview on CBS's "60 Minutes" on Sunday night, except for communicating through his favorite media, Twitter.

The Bedminster golf course is one of Trump's favorite sanctuaries, where he likes to spend weekends and where he prepared for campaign debates against his Democratic rival Hillary Clinton.

In addition to Romney, Trump met with retired general James Mattis who is a candidate for defense secretary and education secretary hopeful Michelle Rhee, a former head of public schools in Washington DC. Several business leaders including Lew Eisenberg, Andrew Puzder, Betsy DeVos and Todd Ricketts, the owner of the Chicago Cubs baseball team were also on Trump's expected schedule.

Romney -- the failed 2012 Republican presidential candidate -- is a long-shot possibility for secretary of state, along with former New York mayor Rudy Giuliani.

Romney would bring a more orthodox Republican worldview to foreign policy. He described Russia in 2012 as the main American geopolitical threat -- a sharp contrast to Trump, who has exchanged compliments with Russian President Vladimir Putin.

During Trump's campaign, Romney described him as a "fraud," rebuking the tycoon for proposals such as banning the entry of all foreign Muslims.

Trump also nominated anti-immigration Senator Jeff Sessions, one of his earliest supporters during the campaign, to be attorney general on Friday, signaling he is prepared to take his hard line on illegal immigration to the White House.

To lead the CIA, Trump tapped hawkish Congressman Mike Pompeo, a strident opponent of the Iran nuclear deal and a sharp critic of former secretary of state Clinton during hearings into the 2012 attack on the US mission in Benghazi, Libya.

The incoming commander-in-chief also appointed retired lieutenant general Michael Flynn as his national security advisor. A controversial retired intelligence officer, Flynn, 57, has described Islam as a "cancer" and a "political ideology," and in February tweeted that "fear of Muslims is rational."

He has also courted controversy for refusing to rule out "enhanced" interrogation techniques such as waterboarding that have been described as torture and that Trump has repeatedly condoned.

But that of Sessions as attorney general does, and he has baggage: racially charged comments he made in the 1980s that cost him a chance for a job for life as a federal judge.

Sessions also fiercely opposes immigration and waged war on efforts to pass comprehensive immigration reform through Congress in 2007 and 2013.

Democratic Senator Elizabeth Warren, a leader of the party's left wing, is spearheading calls for Trump to withdraw his nomination.

"Trump isn't 'draining the swamp,'" she tweeted about his promise to sideline lobbyists and other insiders in Washington. "He's inviting the biggest, ugliest swamp monsters in the front door."