After Macron rubbishes nationalism, Trump goes on massive Twitter tirade against him 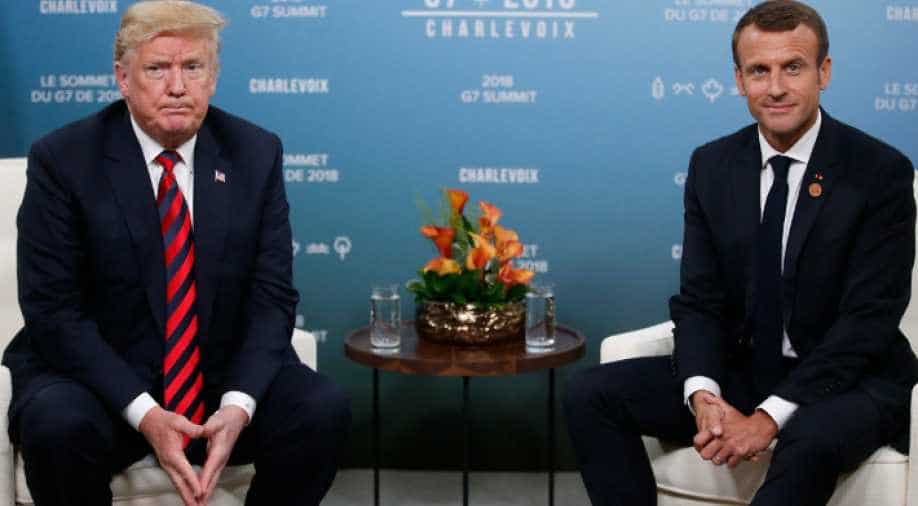 US President Trump sits next to Franch President Macron during a bilateral meeting at the G7 Summit this year in Charlevoix, Canada. Photograph:( Reuters )

'They were starting to learn German in Paris before the US came along,' Trump said. The US President may have been angered by Macron's recent characterisation of 'nationalism' — a doctrine that falls in line with Trump's America First policy — as a 'betrayal of patriotism'.

Donald Trump on Tuesday unleashed an extraordinary attack on Emmanuel Macron, mocking the French president's approval rating and lashing him over European defence proposals, on the heels of a rocky trip to Paris to mark the World War I centenary.

In a caustic series of early-morning tweets the US president lambasted Macron's support for a European army, while renewing his frequent charge that America's European allies in NATO spend too little on defence.

"Emmanuel Macron suggests building its own army to protect Europe against the US, China and Russia. But it was Germany in World Wars One & Two - How did that work out for France?" Trump tweeted.

"They were starting to learn German in Paris before the US came along," Trump said, in a low blow sure to gall French allies. "Pay for NATO or not!"

Emmanuel Macron suggests building its own army to protect Europe against the U.S., China and Russia. But it was Germany in World Wars One & Two - How did that work out for France? They were starting to learn German in Paris before the U.S. came along. Pay for NATO or not!

The problem is that Emmanuel suffers from a very low Approval Rating in France, 26%, and an unemployment rate of almost 10%. He was just trying to get onto another subject. By the way, there is no country more Nationalist than France, very proud people-and rightfully so!........

The fierce broadside against a traditional US ally -- for whom Trump rolled out the red carpet in Washington earlier this year -- came just two days after Trump joined dozens of world leaders in Paris for events to mark the 100 years since the end of the Great War.

After slamming Macron on defence, Trump's went on to attack his standing as president: "The problem is that Emmanuel suffers from a very low Approval Rating in France, 26%, and an unemployment rate of almost 10%."

"He was just trying to get onto another subject," Trump said, appearing to reference Macron's push for a European military. "By the way, there is no country more Nationalist than France, very proud people-and rightfully so!"

"MAKE FRANCE GREAT AGAIN!" the mercurial Trump continued in a play on his own campaign slogan, before turning to what he said were protectionist tariffs on wine -- which he said were "not fair, must change!"

Trump and Macron had seemed to share a special camaraderie in the early days of their respective presidencies, a "bromance" of sorts that included touching, kissing and playful banter.

The US president even seemed to flick a piece of dandruff off of Macron's jacket on national television during the French president's state visit to the US capital, saying "we have to make him perfect. He is perfect."

But the relationship took a turn for the worse after Macron angered Trump by saying Europe needed its own army and listing the US along with Russia and China as a threat to European cybersecurity.

Trump set a combative tone for his visit to Paris, tweeted right after he landed that Macron's call for a "real European army" was "insulting."

In an interview recorded Saturday with CNN after talks with Trump, Macron said the two leaders had spoken about what his office has portrayed as a misunderstanding.

Both leaders agree there should be "better burden-sharing within NATO," meaning Europe should be less reliant on US spending for its defense, Macron said.

But Macron told CNN: "To be very direct with you, what I don't want to see is European countries increasing the budget in defence in order to buy American and other arms or materials coming from your industry."

The president's trip to France was further clouded by controversy over the cancellation of a visit to a World War I US military cemetery -- after his helicopter was grounded by the rain -- a decision that was widely criticized.

"I suggested driving. Secret Service said NO," Trump tweeted in his defence -- pointing out that he had delivered a speech the following day at another American cemetery in the Paris suburbs "in pouring rain!"