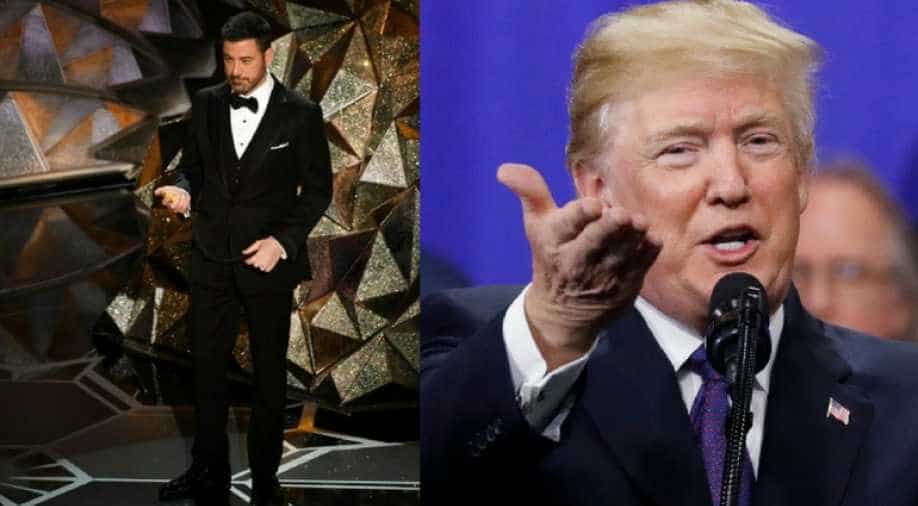 The Oscars telecasted on the 4th of March this year and hit an all-time low viewer rating.

The politically charged 90th annual Academy Awards drew an all-time low of 26.5 million viewers this year, a 20 per cent drop from last year.

Major feud happened when US President Donald Trump took to Twitter to publicise the news saying, "Lowest rated Oscars in HISTORY. Problem is, we don’t have Stars anymore - except your President (just kidding, of course)!"

Lowest rated Oscars in HISTORY. Problem is, we don’t have Stars anymore - except your President (just kidding, of course)!

In no time, Jimmy Kimmel, talk show host who also hosted this years Oscars retaliated in rage and also took to Twitter to shun down Trump and said: "Thanks, lowest rated President in HISTORY."

Kimmel focused on Hollywood's own diversity issues during his opening monologue at the ceremony, though he did manage to throw some shade on Trump, including his assumed dislike for immigrant actress Lupita Nyong’o and his probable misunderstanding of the racially based horror-comedy Get Out.

Moreover, critics are now speculating if ABC will have an awakening and take control of the telecast away from the notoriously arrogant Academy, reports said.

ABC executives have long been rumoured to vent privately about the arrogance of the Academy, but the Oscars are still the second biggest night on television after the Super Bowl, so the Academy continues to celebrate Hollywood's elite exactly how it wants to.

As per reports, viewers have mostly complained about how the Oscars tend to give more regards to self-serving tributes to the yearly tradition of leaving fan favorites out of the “In Memoriam” segment. This year, for example, Adam West and Glen Campbell were posthumously ignored. Others feel the telecast ends too late, takes too long, is too politically correct and doesn’t feature TV stars in an era when television produces household names at the same rate as films.

But, these are not the primary reasons that keep viewers from watching the star-studded event. The two issues that are most commonly mentioned as a turn off for viewers are divisive politics and the lack of well-known movies. While the Academy has a lot of power over the content of the program as its producer, ABC is also responsible for much of the blame, reports suggested.

This is not a one-year trend either. Oscars viewership in 2018 fell by 39 per cent from its ratings just four years earlier, in 2014, when Ellen DeGeneres hosted for ABC. The previous low of 31.8 million viewers came in 2008 when Jon Stewart hosted not long after a lengthy writers' strike ended.