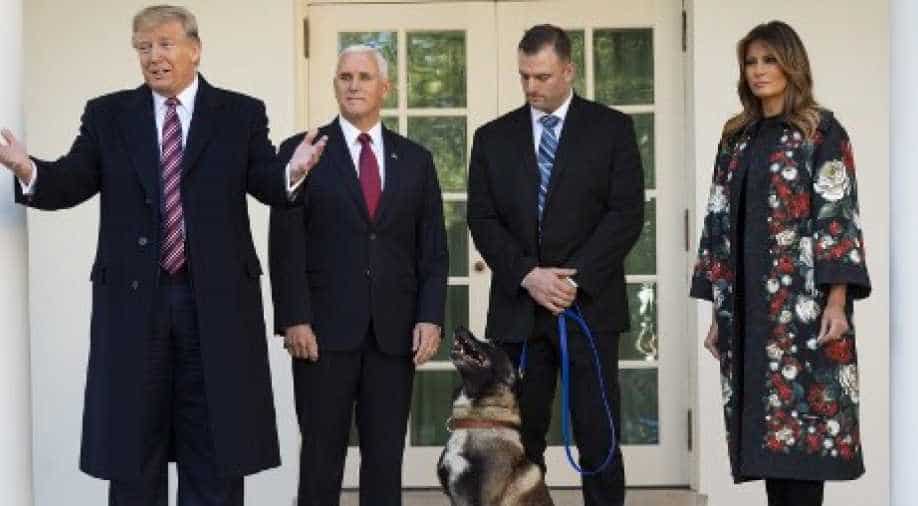 The dog who is in active military service was injured in the raid which was led by US Delta Force commandos.

US President Donald Trump on Monday presented Conan the dog who was responsible for the raid that eventually led to the death of Islamic State leader Abu Bakr al-Baghdadi.

The dog who is in active military service was injured in the raid which was led by US Delta Force commandos. The Islamic State leader blew himself up after the dog chased him into a dead-end tunnel on October 26 in northern Iraq.

"So this is Conan - right now, probably the world's most famous dog," Trump said as he introduced Conan, adding,"Conan did a fantastic job, so brilliant, so smart."

"The dog is incredible, Conan is a tough cookie. And nobody is going to mess with Conan," the US president said with first lady Melania Trump and Vice President Mike Pence by his side.

"Conan was very badly hurt, as you know, they thought maybe he was not going to recover. He recovered actually very quickly and has since gone on very important raids," Trump informed the White House press corps.

"I love this dog," Trump declared. "We're very honoured to have Conan here and to have given Conan a certificate and an award that we're going to put up in the White House," Trump announced.

After the raid, Trump had tweeted a picture of Conan saying that he did a "great job".

US vice-president Mike Pence speaking to reporters, said: "We were able to complete the raid without any American casualty, and so I think having the special forces here today who obviously can't come out in the public - but also having this extraordinary dog here today is all a reflection of our armed forces and the great job that they do."

"Conan is really a hero. It's a real joy to be able to help walk him here to the White House with you," the US vice-president said.

Baghdadi's remains were buried at sea by US armed forces officials similar to the 2011 sea burial of Al-Qaeda leader Osama bin Laden after he was killed in a US special forces raid in Abbottabad in Pakistan.