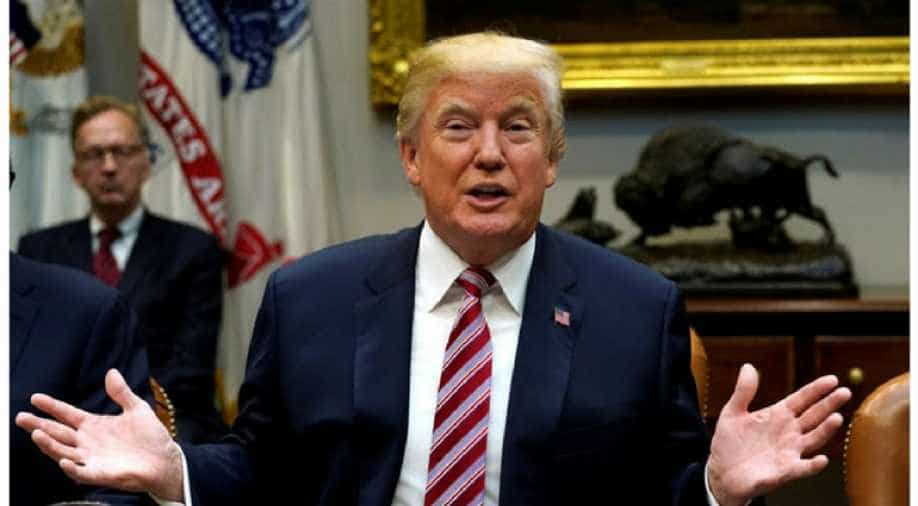 'We are not going to let the United States be taken advantage of anymore. I am always going to put America first the same way I expect all of you in this room to put your countries first,' Trump said. Photograph:( AFP )

President Donald Trump gave a spirited airing of his "America First" doctrine in a speech to Asia-Pacific leaders on Friday, vowing his country will "no longer tolerate" unfair trade, closed markets, and intellectual property theft, as he seeks to rewrite the rules of global commerce.

In a speech that by turns lavished praise on Asia-Pacific nations and accused them of undercutting the world's largest economy, he said US interests had been ill-served by the architecture of global trade.

America "will not tolerate... chronic trade abuses," he said as he took aim at the World Trade Organisation for failing to police free trade infringements.

"We are not going to let the United States be taken advantage of anymore. I am always going to put America first the same way I expect all of you in this room to put your countries first."

In a day bringing together the big hitters of politics and business, Trump will share the venue with world leaders including Russia's Vladimir Putin, Japan's Shinzo Abe, and China's Xi Jinping.

Xi is also set to deliver a speech, likely to present a competing narrative casting China as the leader of global free trade, a role vacated by America.

China announced Friday it will further open the country's financial markets to foreign firms, a key demand from the US and other global investors who have long complained about strict limits on access to the giant economy.

Trump arrives fresh from trips to Tokyo, Seoul, and Beijing, where he sought to build a consensus against North Korea's nuclear ambitions.

In China he was gushing in his praise of Xi, calling his host "a very special man" in a trip rich with photo opportunities but lacking concrete outcomes on tackling key issues such as North Korea.

As the US retreats behind "economic nationalism", China will take a stride forward, said Ian Bremmer of the political consultancy Eurasia.

Free trade on the rack
The White House ruled out any meeting between Trump and Putin, a potential box office event with Russia accused of interfering in the US election last year that brought the billionaire one-time reality TV star to power.

Trump election campaign aides are under intense legal scrutiny in the US over possible ties to the Kremlin, but Russia denies any chicanery linked to his astonishing political ascent.

The rise of Trump as leader of the world's biggest economy risks unpicking decades of US-led economic diplomacy that webbed global economies together with free trade and low tariff pacts.

He has pledged to wring a better deal from countries the US has large trade deficits with -- including China -- and bring jobs back to the hollowed out industrial heartland that voted for him.

But proponents of free trade, including many allies, have looked on aghast as Trump tears up the rulebook and anti-globalization arguments ricochet through the US and Europe.

Trump has already pulled Washington's support from the sprawling 12-nation Trans-Pacific Partnership (TPP) trade pact and vowed to renegotiate NAFTA, a trade deal between the US, Canada, and Mexico.

On Friday, Asia-Pacific ministers were struggling to salvage the TPP deal, with Canada denying reports that an agreement had been struck among the remaining 11 members to press ahead without the US.

Malaysian premier Najib Razak, whose country is among the so-called TPP-11 nations, lamented the wider change of "tone" towards globalization.

"I see the rise of anti-globalization, I see the rise of more inward-looking (nations)... there's a lot of soul-searching we have to do during this APEC," he told a room packed with CEOs on the sidelines of the forum.

The annual APEC summit is one of the largest gatherings on the annual diplomatic calendar, bringing together scores of world leaders and more than 2,000 CEOs.

APEC represents 21 Pacific Rim economies, the equivalent of 60 percent of global GDP and covering nearly three billion people, and has pushed for freer trade since its inception in 1989.