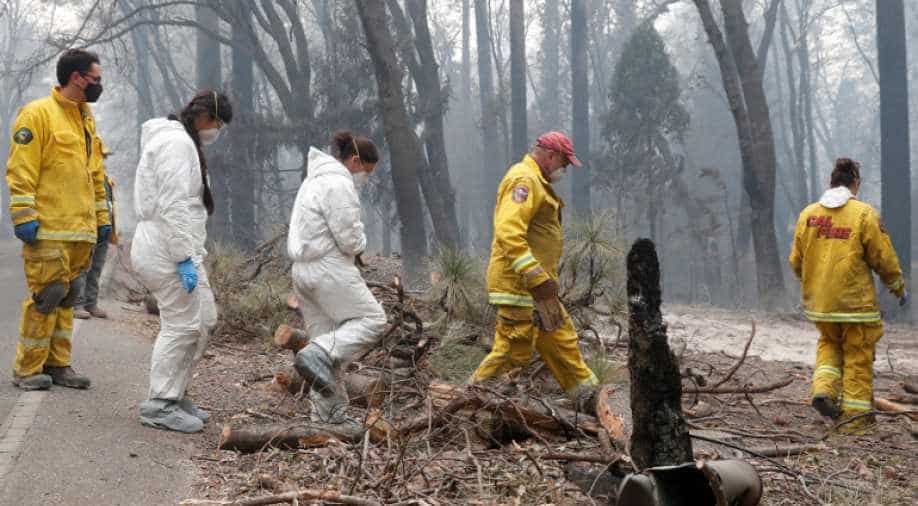 US National Guard troops scoured the ruins of the town of Paradise on Thursday for any sign of 130 people still missing in California's deadliest wildfire on record as authorities said the death toll had risen to 56.

US National Guard troops scoured the ruins of the town of Paradise on Thursday for any sign of 130 people still missing in California's deadliest wildfire on record as authorities said the death toll had risen to 56.

The "Camp Fire" blaze obliterated the Sierra foothills town of Paradise, once home to 27,000 people, last Thursday. Most of those still missing in and around town, which lies about 175 miles (280 km) north of San Francisco, are above the age of 65.

The surface area of the fire had grown to 135,000 acres (55,000 hectares) by of Wednesday evening, even as diminished winds and rising humidity helped firefighters shore up containment lines around more than a third of the perimeter.

Still, the ghostly expanse of empty lots covered in ash and strewn with twisted wreckage and debris made a strong impression on Governor Jerry Brown, US Interior Secretary Ryan Zinke and other officials who toured the devastation on Wednesday.

"This is one of the worst disasters I've seen in my career, hands down," Brock Long, head of the Federal Emergency Management Agency, told reporters in Chico.

"It looks like a war zone. It is a war zone," Brown said.

After visiting some of California's earlier wildfire zones in August, Zinke blamed "gross mismanagement of forests" because of timber harvest restrictions that he said were supported by "environmental terrorist groups."

Pressed by reporters on Wednesday, Zinke demurred. "Now is really not the time to point fingers," he said. "It is a time for America to stand together."

The blaze, fueled by thick, drought-desiccated scrub, has capped two back-to-back catastrophic wildfire seasons in California that scientists largely attribute to prolonged drought they say is symptomatic of climate change.

Lawyers for some of the victims claimed in a lawsuit filed on Wednesday that lax equipment maintenance by an electric utility was the proximate cause of the fire, which officially remains under investigation.

The Butte County disaster coincided with a flurry of blazes in Southern California, most notably the Woolsey Fire, which has killed at least two people, destroyed more than 500 structures and displaced about 200,000 people west of Los Angeles.

The Los Angeles County Sheriff's Department said the body of a possible third victim was found. Cal Fire officials said that blaze was 52 per cent contained as of Wednesday night.

The remains of eight more fire victims were found on Wednesday, raising the official number of fatalities to 56 - far exceeding the previous record from a single wildfire in California history - 29 people killed by the Griffith Park fire in Los Angeles in 1933.

The Camp Fire also stands as one of the deadliest US wildfires since the turn of the last century. More than 80 people perished in the Big Burn firestorm that swept the Northern Rockies in August of 1910.

Butte County Sheriff's spokeswoman Megan McMann said the list of 130 missing would fluctuate from day to day as more names are added and others are removed, either because they turn up safe or end up identified among the dead.

Sheriff Honea invited relatives of the missing to provide DNA samples to compare against samples taken from newly recovered remains in hopes of speeding up identification of the dead. He said it was possible some of the missing might never be found.

Authorities attributed the magnitude of casualties to the staggering speed with which the fire struck Paradise. Wind-driven flames roared through town so swiftly that residents were forced to flee for their lives. Some victims were found in or around the burned-out wreckage of their vehicles.