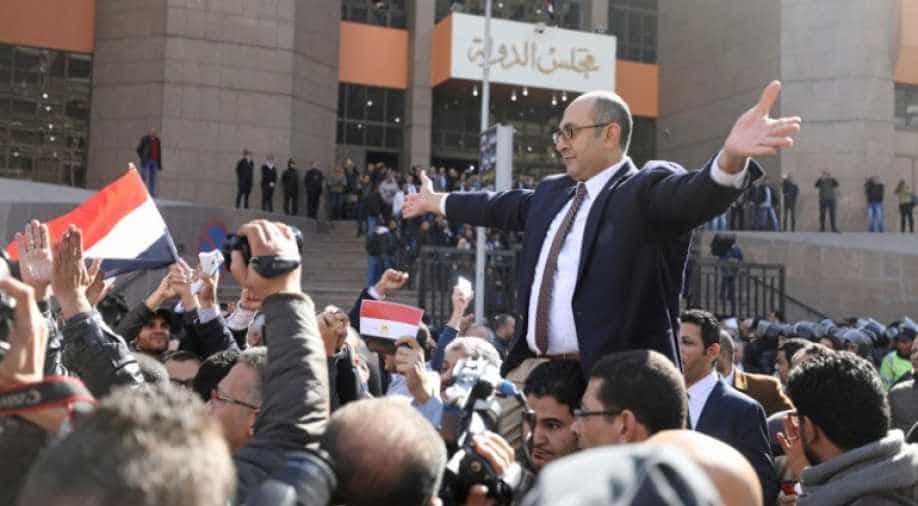 Egyptian lawyer and ex-Presidential candidate Khaled Ali (C), who is marching in support of a ruling against the Egypt-Saudi border demarcation agreement, reacts in front of the State Council courthouse in Cairo, Egypt, January 16, 2017. Photograph:( Reuters )

He was charged because in a photograph he appears to make an obscene hand gesture the Cairo court house steps||If convicted, among other possible punishments, he would be barred from running for the presidency.

An Egyptian human rights lawyer and would-be presidential candidate went on trial on Monday in a case where a guilty verdict would deprive him of the right to stand for election.

A judge in a Cairo court adjourned the trial of Khaled Ali, who is charged with offending public decency, to July 3.

Ali, 45, was detained last week in what rights group Amnesty International said was part of a campaign of intimidation aimed at discouraging participation in the election, due to take place next summer.

He was released on bail 24 hours later.

The charge he faces relates to a photograph in which he appears to make an obscene hand gesture on the steps of a Cairo court house. Ali denies the authenticity of the photo.

He did not attend court on Monday.

Since toppling Mohamed Mursi of the Muslim Brotherhood in 2013, President Abdel Fattah al-Sisi has overseen a crackdown against Islamists and secular opponents in which hundreds have been killed and thousands jailed.

Sisi, 62, says he is a bulwark of stability in a region that has slipped into chaos since the 2011 Arab Spring revolts, prioritising security over civil rights.

He is widely expected to stand for re-election next summer.

Ali gained prominence in January after defending a case against a government plan to transfer two uninhabited Red Sea islands to Saudi Arabia, a deal that prompted mass protests.

He ran for the presidency in 2012 and came in seventh with more than 100,000 votes in a 13-candidate race. He was the youngest candidate, having just turned 40 at the time, the minimum age required to run.

Ali attracted young leftwing voters but most of his support base at the time chose to boycott the election which was being held under the rule of a transitional military council.

He established his socialist credentials when in 2010 he won a case forcing the government to raise the minimum wage to 1,200 Egyptian pounds ($66.50) per month and later went on to co-found the leftwing Bread and Freedom Party.

Eight party members have been detained since April on charges including "misusing social media to incite against the state" and "insulting the president", its legal adviser said.