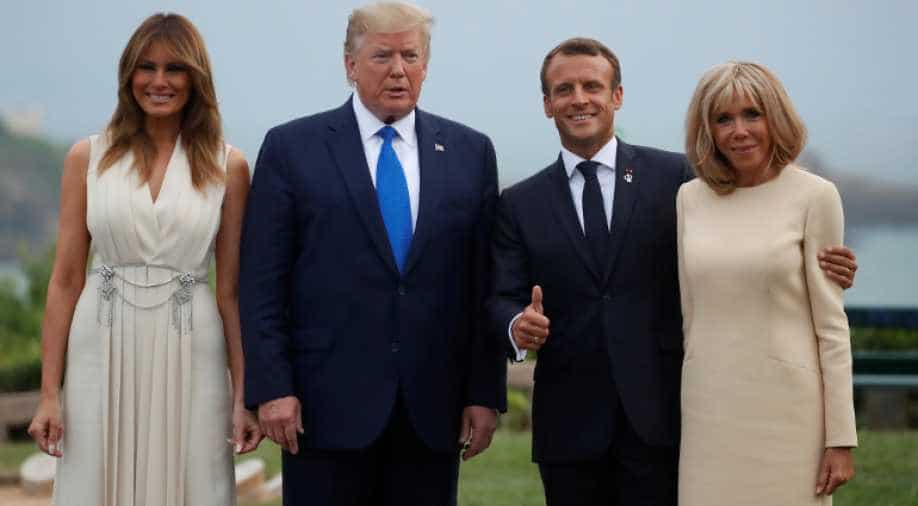 Leaders of the Group of Seven wealthy nations will discuss global trade woes at their annual summit on Sunday, likely laying bare a yawning divide between US President Donald Trump and his Western allies.

The G7 gathering is taking place against a backdrop of growing worries about a global economic downturn and coincides with an era of international disunity across an array of issues that have strained decades-old allegiances.

Trump joined the leaders from France, Britain, Japan, Germany, Italy and Canada in the French coastal resort of Biarritz for three days of talks that kicked off on Saturday with an ambitious agenda that includes the defence of democracy, gender equality, education and climate change.

The delegations had barely arrived before divergences were exposed, with senior US officials accusing the host, French President Emmanuel Macron, of looking "to fracture the G7" by focusing on "niche issues" rather than major global concerns.

France denied this, pointing to Sunday's initial session covering the economy, trade and security - areas that used to draw easy consensus but are now sources of great friction.

Trump arrived in France just hours after escalating his trade war with China in a tit-for-tat battle between the world's two largest economies that has spooked financial markets.

"I am very worried about the way it's going, the growth of protectionism, of tariffs that we're seeing," British Prime Minister Boris Johnson said on Saturday.

"Those who support the tariffs are at risk of incurring the blame for the downturn in the global economy, irrespective of whether or not that is true."

Underlining the discord, Trump also threatened his host on the eve of the summit, saying the United States would tax French wine "like they've never seen before" unless Paris dropped a digital tax on US technology companies.

Leaping into the fray, European Council President Donald Tusk, who takes part in the G7 discussions, warned the EU would respond "in kind" if Trump acted on his threat.

"This may be the last moment to restore our political community," Tusk told reporters on Saturday, giving a bleak assessment of Western relations.

Looking to broaden the scope of the debate, Macron has invited several African leaders to discuss the problems facing their continent, while leaders from India, Australia, Chile and Spain are due to attend a dinner on Sunday where the focus will be on the environment among other issues.

Trump up-ended last year's G7 summit in Canada, walking out of the meeting early and disassociating himself from the final communique having initially endorsed the document.

France has got around that problem by doing away with the time-honoured communique, deciding it was not worth even trying to find common language.

While the transatlantic rift is the most stark, there are also deep divisions within the European camp, with Johnson making his G7 debut at a time when he is struggling to persuade EU capitals to renegotiate Britain's divorce from the bloc.

Johnson and Tusk, who are due to talk on Sunday on the sidelines of the summit, sparred ahead of the meeting over who would take the blame if Britain leaves the EU on October 31 without a Brexit agreement acceptable to both sides.

"I still hope that PM Johnson will not like to go down in history as Mr No Deal," said Tusk, who leads the political direction of the 28-nation European Union.

Johnson later retorted that it would be Tusk himself who would carry the mantle if Britain could not secure a new withdrawal agreement.

Macron added to the internal EU strains by unexpectedly threatening on Friday to block an EU trade deal with a group of South American states over Brazil's handling of fires that are ravaging the Amazon rainforest.

Germany and Britain both voiced deep concern about the blazes, but disagreed with Macron on how to respond, saying shooting down the ambitious Mercosur trade accord would not help save the Amazon.