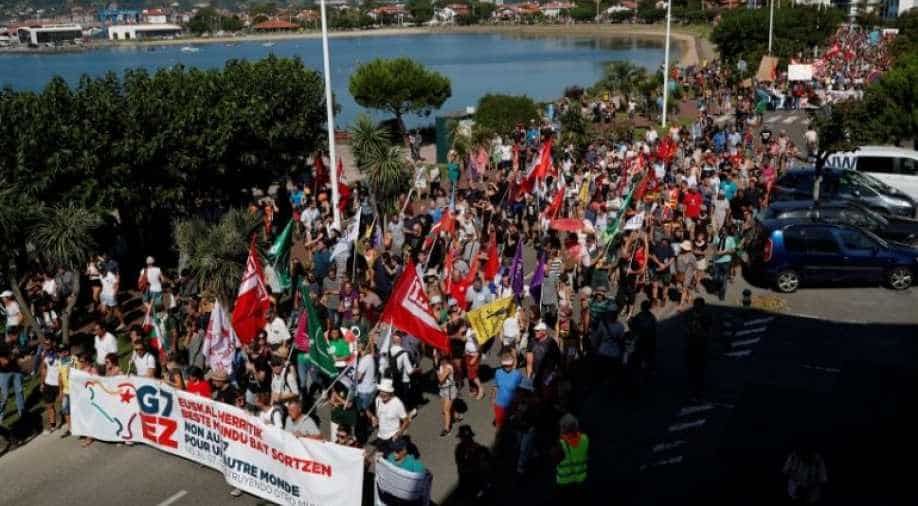 Anti-G7 protesters attend a protest march on the French-Spanish border, in Hendaye during the Biarritz G7 summit. Photograph:( Reuters )

A police helicopter circled as dozens of protesters, some hurling stones, shouted slogans and abuse at the lines of police in the Basque town's historic centre.

French riot police used water cannons and tear gas on Saturday to disperse anti-capitalism protesters in Bayonne, near the resort of Biarritz where President Emmanuel Macron and G7 nation allies were meeting for a three-day summit.

A police helicopter circled as dozens of protesters, some hurling stones, shouted slogans and abuse at the lines of police in the Basque town's historic centre.

The protesters shouted, "Everybody hates the police" and "anti, anti-anti-capitalists" as the mood took a darker turn from peaceful protests earlier in the day in an authorised march on the French-Spanish border.

Roiled by months of anti-government protests this year, France has deployed more than 13,000 police to ensure protesters get nowhere near US President Donald Trump and other leaders. Authorities designated two counter-summit "villages" and the morning protest about 30 kilometres from the summit.

"The top capitalist leaders are here and we have to show them that the fight continues," said Alain Missana, 48, an electrician wearing a yellow vest - symbol of the anti-government demonstrations that have been held in France for months.

"It's more money for the rich and nothing for the poor. We see the Amazonian forests burning and the Arctic melting. The leaders will hear us," he said.

Four police officers were lightly wounded on Friday after protesters fired a homemade mortar near the anti-G7 gathering in Hendaye. Police arrested 17 people for hiding their faces.

Activists in the counter-summit villages have this week united from France, the Basque region straddling the French-Spanish border and beyond to confront a rich-poor divide they say is growing due to the cynicism of world leaders.

"The counter-G7 demonstration is in this Basque region and we want people to see we are part of it," said Alfredo Akuna, a 46-year-old engineer from San Sebastián in northern Spain who wore traditional Basque clothing.

"We're involved in many movements including anti-capitalism and anti-fascism so it's important to be here to show that."