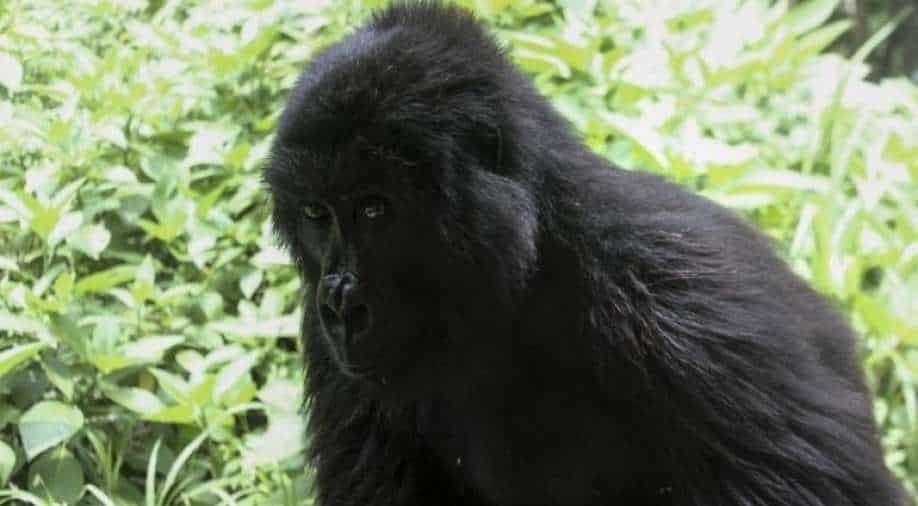 An orphaned baby mountain gorilla is seen at the Senkwekwe centre in Rumangabo in the Virunga National Park in the East of the Democratic Republic of Congo on September 10, 2016. Photograph:( AFP )

The park, inscribed on the UNESCO World Heritage list, is notably home to the world's biggest population of eastern lowland gorillas

Tourists who were near the crater the Nyiragongo volcano in the Democratic Republic Congo erupted are safe, the Congolese Institute for the Conservation of Nature (ICCN) said Sunday.

Nor were the rare mountain gorillas in the Virunga National Park threatened by the eruption, the institute added.

"The tourists present yesterday at the crater are safe and sound", the institute, which oversees the wildlife sanctuary, said on Twitter, without indicating their numbers or nationalities.

The park, inscribed on the UNESCO World Heritage list, covers 600,000 hectares (1.5 million acres) of tropical rainforest that is notably home to the world's biggest population of eastern lowland gorillas.

The Nyiragongo volcano, whose slopes of which dominate the city of Goma and Lake Kivu, erupted suddenly on Saturday night, sending thousands of residents fleeing in panic.

A vast river of molten lava came to a halt Sunday on the outskirts of Goma, sparing the city.

The Goma region is a zone of intense seismic activity, with six volcanos, including Nyiragongo and Nyamuragira, which rise to 3,470 and 3,058 metres (11,384 and 10,033 feet) respectively.

Eruptions are frequent, not just from craters but from the sides of the volcanos.