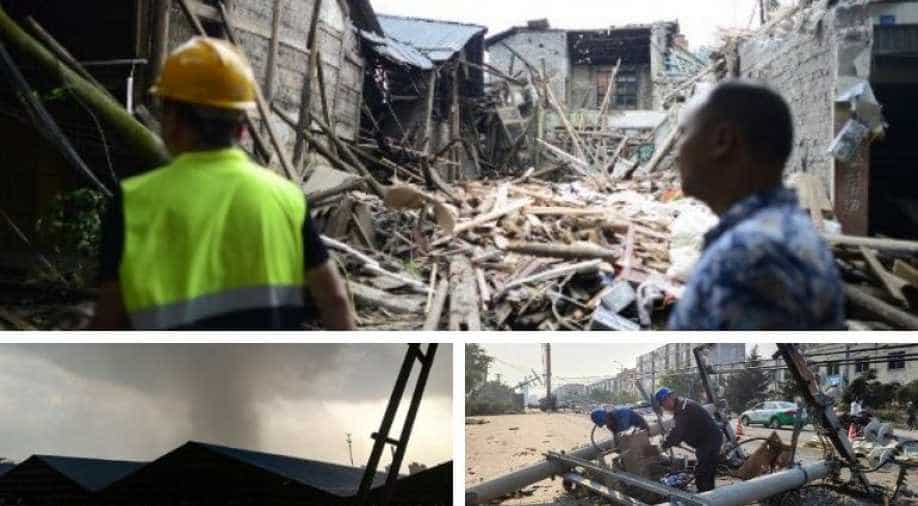 The tornado damaged nearly 3,600 homes and affected more than 9,900 residents in Kaiyuan, a city of around half-a-million people, according to China Central Television.

A tornado swept through the northeastern Chinese province of Liaoning on Wednesday, killing six and injuring 190, the state broadcaster said, amid a series of "extreme" weather events that government forecasters have linked to climate change.

The tornado damaged nearly 3,600 homes and affected more than 9,900 residents in Kaiyuan, a city of around half-a-million people, according to China Central Television.

Footage posted by CCTV on its official Weibo account shows dozens of flattened buildings in an economic development zone in Kaiyuan.

China's Global Times newspaper said that tornadoes were rarely seen in the area.

The country's weather bureau on Tuesday said that climate change could cause more extreme weather events, following floods, drought and extremely high temperatures in some regions this year.

It said rainfall had broken records in some areas and that as many as 40 weather stations had this year registered their hottest temperatures ever.

The northern Chinese province of Hebei issued an extreme heat 'red alert' on Thursday, with temperatures set to soar beyond 40 Celsius (104 Fahrenheit) in its major cities and putting the area's corn crop at risk, the local government said.

The government of Hebei said on its official website that the cities of Baoding, Shijiazhuang, Hengshui, Cangzhou, Xingtai and Handan were all expected to see temperatures above 40C on Thursday.

The local weather bureau also warned that the extreme heat and drought in the province were likely to affect its corn crop. Hebei, which surrounds the capital Beijing, is among China's biggest producers of the grain.

Rainfall in the province has declined 23.9% compared to the average in the second quarter of 2019, the local Hebei Daily reported.

Cities in Hebei have been deploying sprinklers mounted on trucks to try to keep temperatures down, putting further pressure on water supplies.

A heat wave that has swept across northern China, including the capital Beijing, is expected to last until next week, the Hebei Daily said, citing the local weather bureau.

In a joint statement with France and the United Nations released on Saturday, China promised to show the "highest possible ambition" when it comes to fighting global warming, with higher targets to cut carbon emissions expected next year.