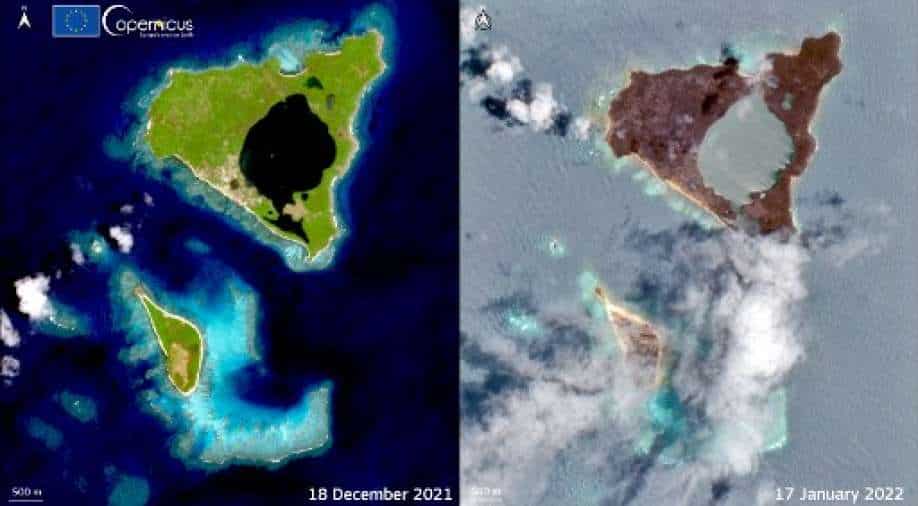 Tsunami and then volcano in Tonga Photograph:( AFP )

The United Nations said the agency will conduct most operations remotely, and may not send personnel to the island.

After an underwater volcanic eruption, now considered to be the world's largest in the last three decades, created a terrible tsunami and sent heavy smoke and soot billowing across the Pacific island nation of Tonga, Australia and New Zealand have despatched relief.

Australia and New Zealand have been loading naval ships and aircraft with aid for Tonga as the United Nations said it was preparing for distance relief operations to avoid a COVID-19 outbreak in the Pacific island nation.

Tonga is reeling from the effects of an undersea volcanic explosion approximately 65 kilometres north of Nuku'alofa, the country's capital, which generated a tsunami up to 15 metres high and sent waves crashing across the Pacific.

In its first announcement since Saturday's disastrous eruption, the government announced that all of the homes on one of Tonga's small offshore islands were destroyed, and three individuals have been confirmed dead.

Because communications have been severely hampered by the severing of an undersea cable, reconnaissance planes have been the primary source of information on the scope of the devastation thus far.

Tonga has said its water supplies have been contaminated by ash from the Hunga Tonga-Hunga Ha'apai volcano, which erupted with a blast 2,300 km (1,430 miles) away in New Zealand. It also sent tsunami waves across the Pacific Ocean.