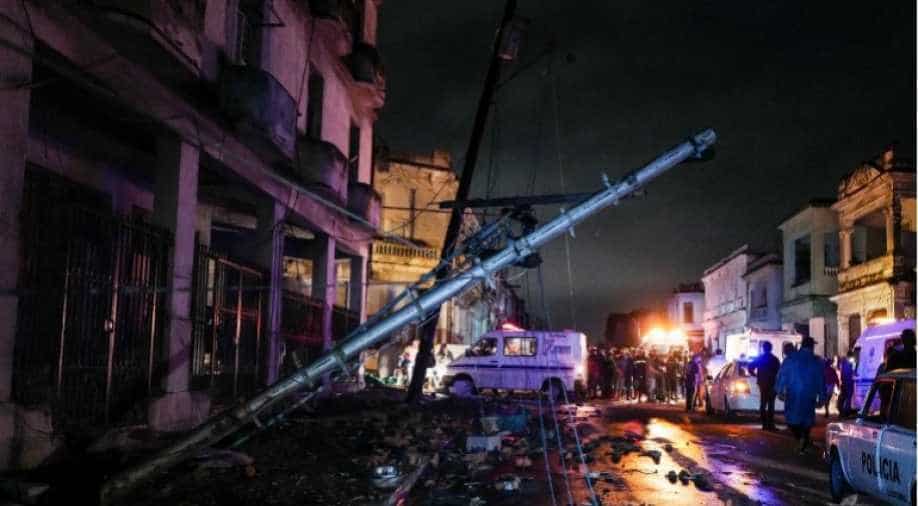 A fallen utility pole is seen among debris in the tornado-hit Luyano neighbourhood in Havana. Photograph:( AFP )

The tornado overturned vehicles, uprooted trees, knocked down lampposts, and left part of the city in the dark.

Diaz-Canel, who toured the darkened streets of Havana in the pre-dawn hours visiting emergency crews, wrote on Twitter that damage to the Cuban capital from the late Sunday tornado was "severe."

The tornado overturned vehicles, uprooted trees, knocked down lampposts, and left part of the city in the dark.

In the city's Luyano neighbourhood storm debris -- including parts of a balcony ripped off an old building --  blocked the streets, AFP photographers reported.

As emergency sirens blared across the city, firefighters and ambulances rushed about on rescue missions, their flashing lights giving light to blacked out areas.

"Aas of now we mourn the loss of three human lives and 172 injured people are receiving aid", Diaz-Canel tweeted.

He added that several emergency teams were working hard to restore power to blacked-out areas.

At the Hijas de Galicia maternity hospital staff were forced to evacuate the building due to storm damage.

The tornado, spawned by a powerful storm that originated in the Gulf of Mexico, hit western Cuba with winds of up to 100 kilometres (62 miles) per hour.

People described the tornado as having "the sound of a jet engine," and reported feeling changes in the environmental pressure when it arrived, Armando Caymares with the Institute of Meteorology said.

The tornado "caught me in the street, in the car with my wife and children," actor Luis "Panfilo" Silva wrote on his social media account.

"I had to dodge fallen trees, flooded areas and strong winds until I managed to get home. We experienced great fear," he wrote.