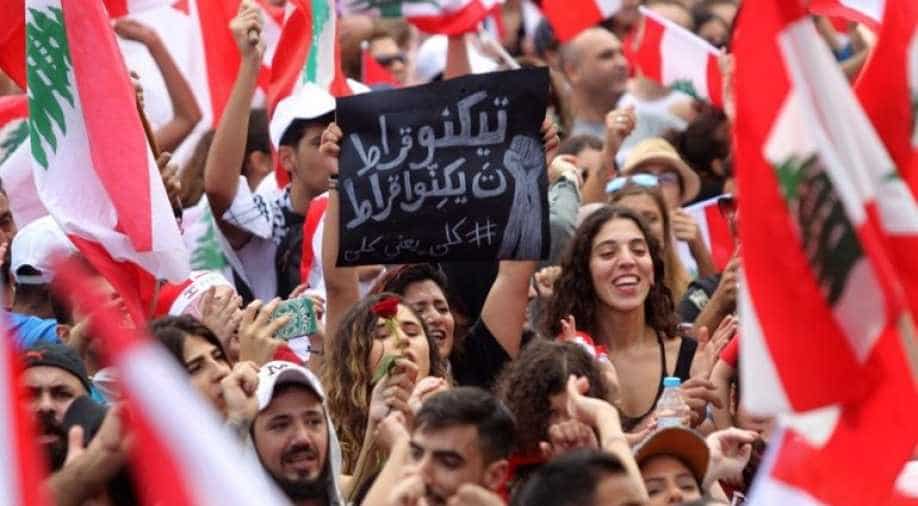 Fans of the president waved large Lebanese flags and orange-coloured banners of the Free Patriotic Movement.

Thousands of backers of Lebanon's embattled president rallied Sunday in a show of support, after more than two weeks of massive nationwide anti-graft protests that brought down the government.

They paid tribute to President Michel Aoun outside the capital, ahead of another demonstration planned in Beirut to demand a complete overhaul of a political system deemed inefficient and corrupt.

In the town of Baabda, supporters of the retired general turned head of state filled up a two-kilometre-long road leading to the presidential palace, an AFP correspondent said.

Fans of the president waved large Lebanese flags and orange-coloured banners of the political party he founded, the Free Patriotic Movement, he said.

"We are here, General. We won't abandon you as long as we live," one poster read, responding to a cross-sectarian movement calling for an end to his term.

Some Aoun supporters wore orange T-shirts while others held up portraits of the 84-year-old president.

"General Aoun is a reformist and sincere man, not corrupt nor a thief," said one supporter who gave her name as Diana.

"There has been corruption in the state for 30 years. The president isn't responsible. He's trying to fight against graft," she said.

In Baabda, Aoun supporters said they backed the general demands of protesters nationwide but insisted the president was the only man able to bring about reforms.

"There were slogans against the president. That's not fair," said Hanna Nader, an unemployed man in his forties.

More than 25 percent of the Lebanese live in poverty, the World Bank says.

Economic growth in Lebanon has stalled in recent years in the wake of repeated political crises, compounded by an eight-year civil war in neighbouring Syria.

On Tuesday, Prime Minister Saad Hariri announced his cabinet would step down.

But it is still unclear what a new government will look like and if it will include independent technocrats as demanded by demonstrators.

Thousands of anti-government protesters flocked together in the northern city of Tripoli Saturday night, many from other parts of the country.