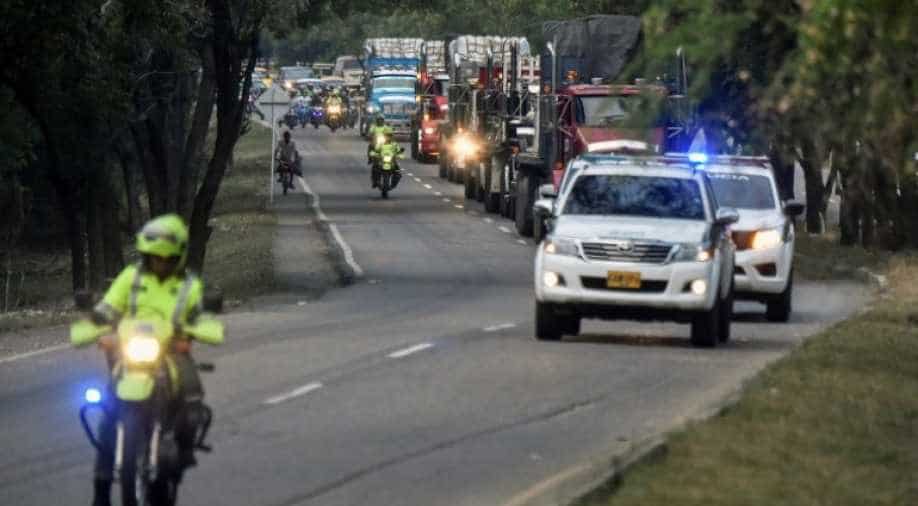 Trucks loaded with humanitarian aid for Venezuela arrive at the Tienditas Bridge in Cucuta, Colombia, on the border with Tachira, Venezuela. Photograph:( AFP )

Venezuela is gripped by a power struggle between socialist leader Maduro and Juan Guaido, the head of the National Assembly who proclaimed himself interim president last month and now has the backing of more than 50 countries.

Thousands of volunteers in Venezuela will begin mobilising on Sunday to bring American aid into their crisis-hit country despite a blockade by President Nicolas Maduro who claims the assistance could be cover for a US invasion.

Once-wealthy Venezuela is gripped by a power struggle between socialist leader Maduro and Juan Guaido, the head of the National Assembly who proclaimed himself interim president last month and now has the backing of more than 50 countries.

But even as the political battle pitting Guaido against Maduro continued to deepen, Caracas confirmed talks had taken place with an envoy for US President Donald Trump's administration.

The oil-rich country's economic meltdown under Maduro has left millions in poverty facing shortages of medicine and food, with hyperinflation making purchases impossible.

US aid that has been piling up in the Colombian border town of Cucuta has become the frontline of the confrontation between Guaido and Maduro.

"Venezuela is preparing for the humanitarian avalanche," Guaido told about 4,000 supporters clad in white T-shirts and green scarves who gathered Saturday to sign up as volunteers.

Six hundred thousand people have registered to help bring aid in through border points, Guaido told the Caracas rally, asking the volunteers to meet in town councils on Sunday to get instructions about the process.

Without revealing details that could jeopardize the operation, Guaido said volunteer brigades will travel in a bus caravan to entry points for the aid which he wants to come in next Saturday.

Coromoto Crespo, 58, told AFP he volunteered because of the urgent need for supplies.

"To find medicines requires a miracle. I need tablets for high blood pressure, and what I find, I can't pay for," Crespo said.

"One of my relatives died because of a lack of antibiotics."

Guaido has targeted February 23 for entry of the aid, more of which arrived for the stockpile on Saturday. Three US military cargo planes delivered several dozen more tons (tonnes) of food assistance to Cucuta.

Another US aircraft is due in the Caribbean island of Curacao from Miami on Tuesday, and a collection centre for Brazilian aid will open Monday on the border, Guaido's team said.

The US shipment Saturday was accompanied by a delegation led by Mark Green, head of the US Agency for International Development.

US assistance has been blocked by containers which Maduro loyalists placed on a border bridge to prevent access.

On another front, Venezuelan Foreign Minister Jorge Arreaza confirmed having held two meetings with special US envoy Elliott Abrams. Arreaza, who traveled to New York on February 13, said he held the talks with Abrams at the request of the State Department. He declined to comment on the substance of their discussions.

Guaido repeated his call on Venezuela's military -- whose support for Maduro has been crucial -- to let the aid pass.

"You have, in your hands, the possibility of fighting alongside the people who are suffering the same shortages you are," Guaido said in a tweet addressed to soldiers.

A State Department spokeswoman, Julie Chung, issued a similar plea during a news conference in Cucuta, urging the military to stand aside at a time when Venezuelans are "dying of hunger."

Maduro asserts that aid could be used as a way for the United States to invade. He called for reinforced border security and dismissed the arriving "crumbs" as "rotten and contaminated food."

On Friday Maduro instructed his army to prepare a "special deployment plan" for the 2,200-kilometer (1,370-mile) border with Colombia. He said he would examine "what new forces" might be needed to keep the frontier "inviolable."

Maduro has assailed the US aid as a "show" but Arreaza said he would be willing to meet with "the devil" if it helped ensure Venezuelan sovereignty.

About 2.3 million Venezuelans have fled the country since 2015 as the crisis intensified, according to the United Nations.

Guaido accuses Maduro of being a "usurper" over his controversial reelection last year in polls widely branded as fraudulent.

Maduro, the hand-picked successor to socialist firebrand Hugo Chavez, blames Venezuela's woes on US sanctions, more of which were added on Friday.

He said six million families had benefited from subsidized food boxes and he claimed to have bought 933 tons of medicines and medical supplies from China, Cuba and Russia, his main international allies.

"We paid for it with our own money because we're beggars to no one," Maduro said.