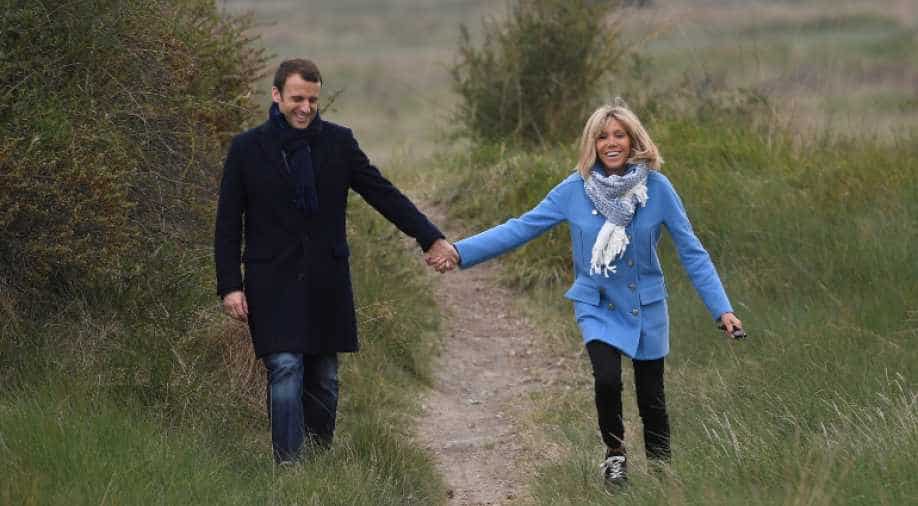 Brigitte met her future husband when he was 15. She was his teacher. Photograph:( AFP )

There has been tremendous interest in the new French first lady, largely because she is 25 years older than her husband

The 25-year age difference and the extraordinary way they met -- he pursued her when he was her pupil -- makes her the most talked-about French president's partner since Nicolas Sarkozy married singer-model Carla Bruni nine years ago.

Even Madonna is a fan, writing on Instagram after Macron's election that "no-one seems to care about their age difference nor insisted that Brigitte 'act her age'".

As a teacher, I know young people... My fight will be education, to give them something other than hanging around in the stairwells of apartment buildings,' Brigitte told Paris Match in an interview last year

Elegant, always tanned and blonde, Brigitte is her husband's closest collaborator and he has pledged to give her an official role -- unlike in the US, there has hitherto been no definition of First Lady in the French presidency.

"As a teacher, I know young people... My fight will be education, to give them something other than hanging around in the stairwells of apartment buildings," she told Paris Match in an interview last year.

During the campaign, there were dozens of carefully-managed glossy magazine covers and then an appearance at her husband's side with her family at the Louvre pyramid in Paris for his victory party, dressed in a striking blue Louis Vuitton outfit.

But before all that she was another man's wife and mother-of-three who taught French, Latin and drama and was on course for a comfortable, if somewhat conventional, life.

Brigitte Trogneux was born on April 13, 1953, in Amiens in northern France, which is also Emmanuel Macron's home town, into a prosperous family that owns a chocolate business.

In the early 1990s a confident 15-year-old acting in a production of Milan Kundera's "Jacques and his Master" caught her eye. It was Emmanuel.

She quickly agreed when he asked her to help him work on a script and a remarkable relationship began.

Brigitte, who was then 39, recalls she was "totally captivated" by Emmanuel's intelligence.

Two years later he made an audacious prediction.

"At the age of 17, Emmanuel said to me 'whatever you do, I will marry you'," she told Paris Match last April.

Emmanuel was sent off to finish high school at an elite establishment in Paris, but he kept pursuing her and gradually she was won over.

'When I decide something...'
Brigitte left her husband Andre Louis Auziere, a banker, in 2006 and married Macron a year later. She moved to Paris where he continued his studies and she worked as a teacher.

"When I make up my mind about something, I do it," she said in a documentary.

"She didn't love me for what I had, for the standing, the comfort or the security that I could give her. She gave up all of that for me," Macron wrote in his campaign-launching book "Revolution".

Known as "Bibi" to friends, Brigitte is described as warm, down-to-earth and unfailingly positive by those who know her.

One of them, Gregoire Campion, met her on a beach in the northern resort town of Le Touquet over 40 years ago. Their beach huts were next to each other and he remembers the young Brigitte "wasn't a party animal" but was "very educated".

Le Touquet has remained a part of her life and the now grandmother of seven spends many weekends there with her family and her husband.

It is a place to gather with her son and two daughters from her first marriage -- who have grown up to be an engineer, a cardiologist and a lawyer.

She enters the Elysee Palace with words of encouragement ringing in her ears. One of her short-lived predecessors, Valerie Trierweiler, had an unhappy experience as the companion of outgoing president Francois Hollande. The journalist left Hollande in 2014 after discovering he was having an affair with actress Julie Gayet.

"I have only got thing to say to her: Good luck Brigitte!" Trierweiler said on Friday.