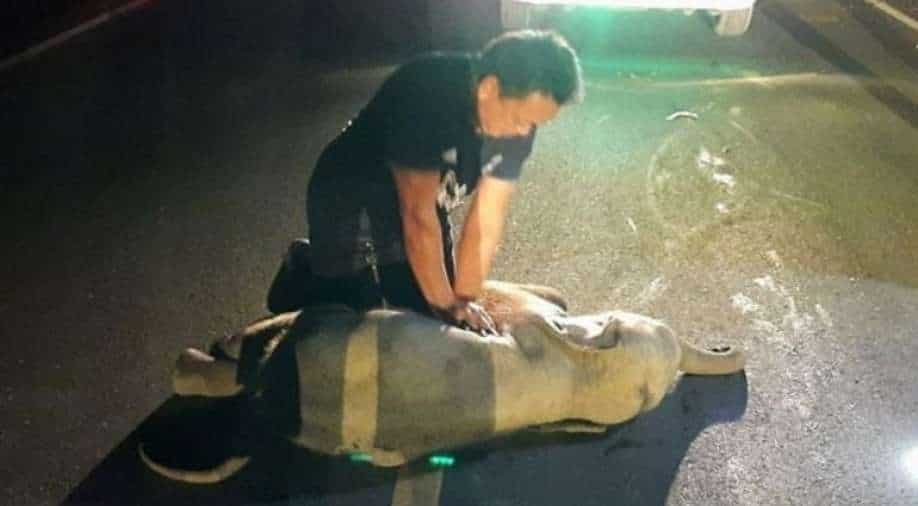 'I assumed where an elephant heart would be located based on human theory and a video clip I saw online.,' the rescue worker said

In one of the most heart-warming incidents, a rescue worker was spotted trying to give CPR to a baby elephant who was hit by a motorbike.

Mana Srivate, a rescue worker from Thailand, has been in the profession of healthcare for the last 26 years and has performed dozens of resuscitation. However, never did he think he would have to perform one on an elephant.

In the eastern province of Chanthaburi, a motorcyclist crashed into a baby elephant who was crossing the road with his herd. Both, the elephant and the motorcyclist, were injured in the collision after which emergency services were called.

While the unit served to the motorcyclist, Srivate helped the baby elephant who was lying in the middle of the road. His act was captured on video which was circulated on Thailand's social media.

In the video, Srivate can be seen giving two-handed compressions to a small elephant lying on its side as colleagues a few metres away treat a dazed and injured motorcycle rider.

"It’s my instinct to save lives, but I was worried the whole time because I can hear the mother and other elephants calling for the baby," Srivate said. "I assumed where an elephant heart would be located based on human theory and a video clip I saw online."

The elephant was taken to a nearby location for treatment and was later returned to the same spot after it made recovery. Immediately after the baby elephant called out its mother, the herd of elephants came back to help the baby of the family.

This was also a special case for Srivate as this baby elephant was the only one who had ever revived after CPR, even though Srivate has given the treatment to dozens of victims.

The motorcyclist, too, was given treatment and he recovered soon from the shock and non-life-threatening injuries.