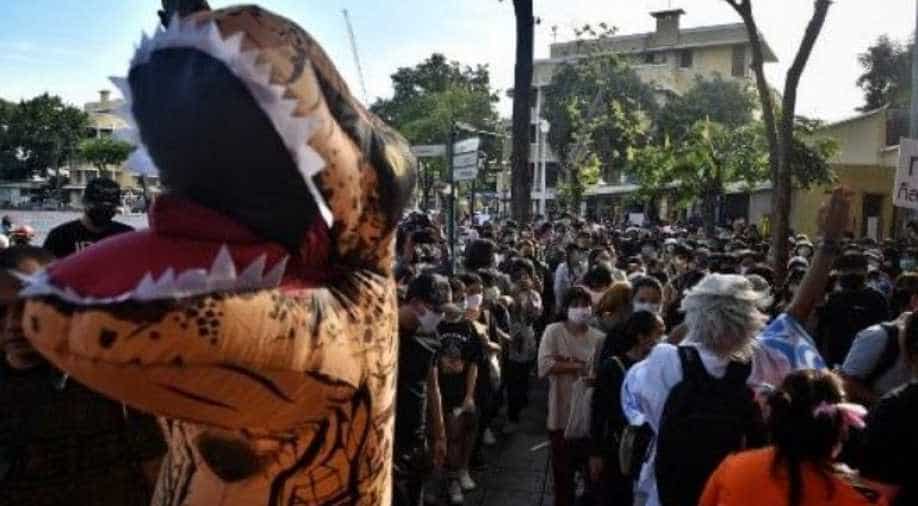 The student-led protests are seen for weeks in the country, in which demonstrators are demanding a re-write to a 2017 constitution and the parliament dissolution

Thousands of students in Thailand continued their protest against the government on Monday, with questions now being raised on monarchy's role too.

Nearly 3,000 to 4,000 demonstrators chanted "Long live democracy" at Thammasat University on outskirts of Bangkok, demanding the resignation of Prime Minister Prayuth Chan-ocha, who came into power through a military coup in 2014.

The student-led protests are seen for weeks in the country, in which demonstrators are demanding a re-write to a 2017 constitution and the parliament dissolution.

However, now, students have started entering the dangerous territory, calling an end to the kingdom's draconian royal defamation law, an arbitrary rule that carries a sentence of up to 15 years per charge.

Experts say that the law is so vague that it makes any criticism to the royal family virtually impossible.

During Monday's protests, activists Anon Numpa and activist Panupong, who were arrested over the weekend and charged with sedition, gave speeches, in which Anon once again demanded a frank discussion on monarchy's role in Thailand.

Once again, there were anti-government songs and protesters gave a three-finger salute, a gesture for freedom seen in "The Hunger Games" trilogy, after Anon's speech.

Organisers said the next rally wil be held on Wednesday, which is a public holiday marking the birthday of Queen Mother.

Thai activist Pavin Chachavalpongpun, who is currently in exile in Japan, also gave a speech through video-conferencing at the end, where he encouraged students to speak openly.

Chachavalpongpun was granted asylum in Japan following his vocal criticism against the military rule in Thailand.