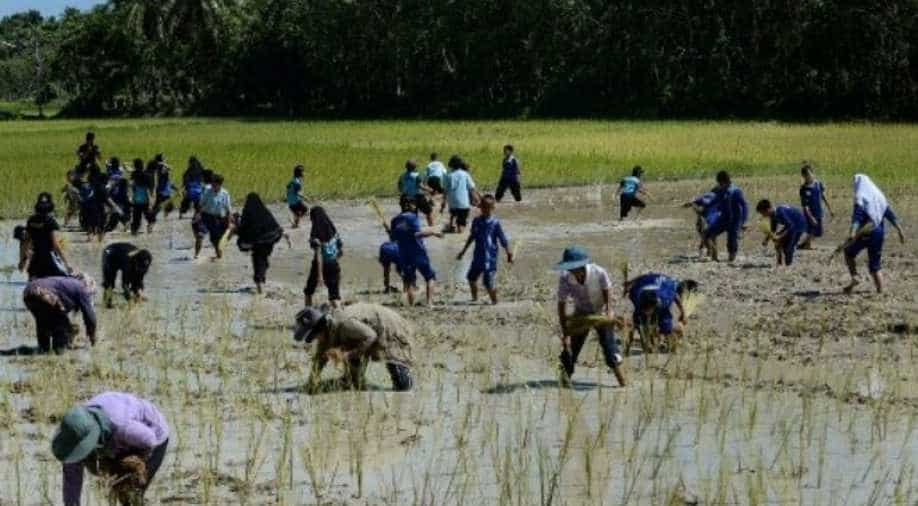 Farmers working together to harvest rice during a multicultural gathering in Mai Kaen district in Thailand. Photograph:( AFP )

The country has been struggling to export rice at a time when the Thai baht is Asia's best-performing currency and is trading near its strongest in more than six years at 30.81 against the US dollar.

Thailand's rice exports fell by 12 per cent in the first half of 2019 hurt by a strong baht, and will likely fall short of this year's target of 9.5 million tonnes, an exporter group said on Wednesday.

The country has been struggling to export rice at a time when the Thai baht is Asia's best-performing currency and is trading near its strongest in more than six years at 30.81 against the US dollar.

Thailand, the world's second-largest rice exporter after India, shipped 4.2 million tonnes of rice between January and June, with orders in the last two months declining to as low as 600,000 tonnes per month. This was below a targeted monthly average of 800,000 tonnes.

"If the baht keeps strengthening below 30 against the dollar, it's game over for us."

Thai benchmark 5 per cent broken rice was quoted last Thursday at an average of $404 per tonne, significantly higher than the same grade from competitors India and Vietnam at $372.5 and $332.50 respectively.

But now, even reaching 9 million tonnes will be hard, Chookiat said.

"With a price gap like this, it's a no-brainer that buyers would go for Vietnamese rice," he said.

Thailand also faced competition from China, as the world's biggest rice importer and Thailand's third-biggest buyer last year has been offloading its stockpiles.

China has slowed trade with its two biggest partners Thailand and Vietnam this year due to large state reserves, and has been selling its stockpiles of "old rice", which ended up in the African markets previously dominated by Thailand, Chookiat said.

"Because China doesn't buy from Vietnam this year, Vietnam has a lot of rice to compete with us in every market. At the same time China takes our African markets," he said.

From January to May, Thailand has exported rice worth 3.7 billion baht ($120.1 million) to China, a 45% decline from the same period last year, according to the Thai commerce ministry data.

"From then to now, there haven't been any new orders for the deal," Chookiat said.