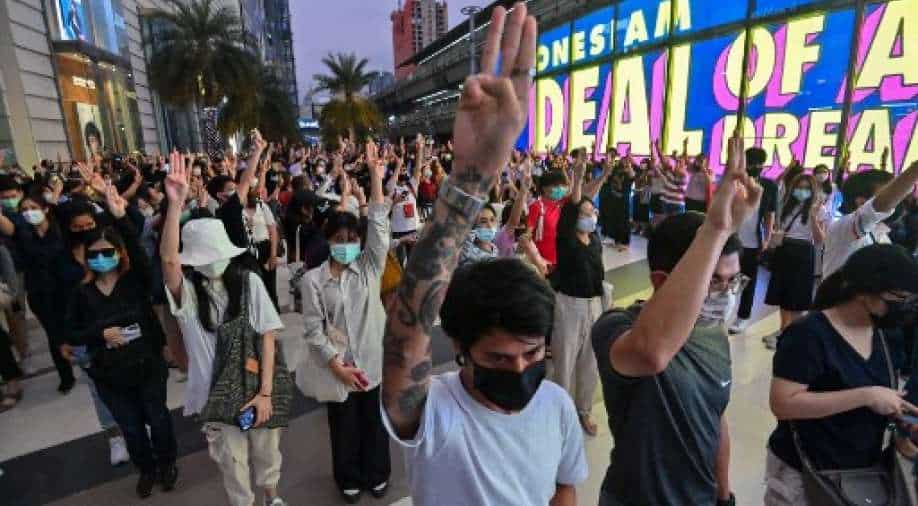 Pro-democracy protesters give the three-finger salute during an anti-government rally outside Siam Paragon shopping centre in Bangkok Photograph:( AFP )

At least two protest leaders were arrested on Tuesday as Prayuth Chan-ocha's cabinet agreed to an emergency session of parliament next week.

Thai authorities on Tuesday ordered the closure of a news outlet connected to exiled former premier Thaksin Shinawatra as anti-government protests continued in the country.

The news site named Voice TV which is partly owned by Thaksin's family was ordered to close as other media organizations have also become the focus of government clampdown.

A court ordered the suspension of the online TV station.

"Voice TV had also been found to have breached the Computer Crime Act by uploading false information," digital ministry spokesman Putchapong Nodthaisong said. At least three other media organization are under investigation.

Thaksin Shinawatra was overthrown by Prayuth in a 2014 coup and had fled the country to escape corruption cases.

"Media freedom is important but in some cases there are some media outlets disseminating distorted information that is inciting unrest," Prayut said after the court order.

Protesters have called for the resignation of prime minister Prayut Chan-O-Cha, a former army chief. At least two protest leaders were arrested on Tuesday as Prayuth Chan-ocha's cabinet agreed to an emergency session of parliament next week.

The protesters have also been seeking curbs on the power of the monarchy, a demand which has been rejected by Prayut. The government imposed emergency measures last week as unrest spread in the nation's capital Bangkok.