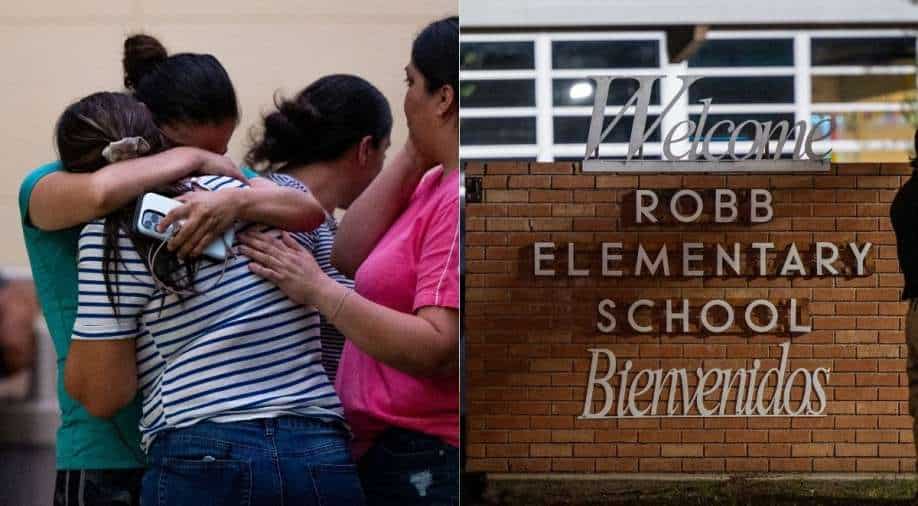 People mourn outside of the SSGT Willie de Leon Civic Center following the mass shooting at Robb Elementary School on May 24, 2022 in Uvalde, Texas. Photograph:( AFP )

On getting apprised about Texas elementary school shooting, US President Joe Biden spoke with Governor Greg Abbott and offered assistance. The president will also address Americans in the wake of this terrible shooting

After one of the deadliest shooting incidents in the US state of Texas, several leaders of the country have been calling for making right amends to end the shooting spree, which seems to have become common in the country. In the latest incident, around 18 children and three adults have been killed along with the gunman on Tuesday, as per media reports. The incident has evoked sharp reactions from several lawmakers. On the shooting, Vice President Kamala Harris said, "Our hearts keep getting broken. Enough is enough. As a nation, we have to have the courage to take action."

The shooting took place at a Texas elementary school, Governor Greg Abbott said. In the crime, 18-year-old shooter, who was a local, was also killed. Senator Chris Murphy said, “What are we doing? What are we doing?…This only happens in this country and nowhere else. Nowhere else do little kids go to school thinking that they might be shot that day."

The gunman opened fire at Robb Elementary School in Uvalde. "I’m here on this floor to beg to literally get down on my hands and knees and beg my colleagues. Find a path forward here," said Murphy, who represents Newtown, Connecticut.

On getting apprised about Texas elementary school shooting, US President Joe Biden spoke with Governor Greg Abbott and offered assistance. The president will also address Americans in the wake of this terrible shooting.

A Parkland shooting victim’s father said, "To any family that has lost a kid today: I know the pain...But you have only a small segment of time with the cameras in front of you...While you have the access to show your anger...please do it. Because the media will not be there forever."