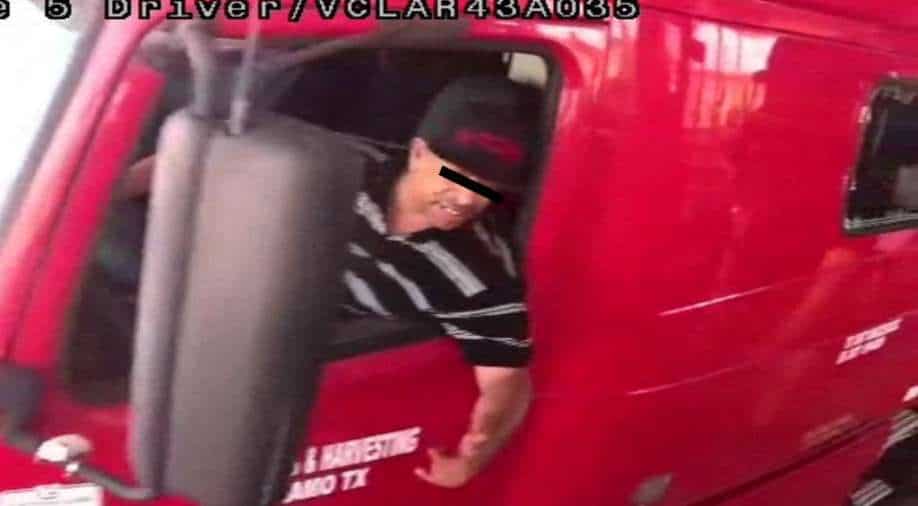 The alleged driver of a truck carrying dozens of migrants, identified by Mexican immigration officials as "Homero N", drives through a security checkpoint in this surveillance photograph in Laredo, Texas, in this handout photo distributed to Reuters on June 29, 2022. Photograph:( Reuters )

The truck's alleged driver, Homero Zamorano Jr, 45, a Texas native who was arrested near the scene, was charged in a criminal complaint with one count of "alien smuggling resulting in death," according to the Justice Department

The man suspected to be driver of the truck packed with dozens of migrants who died in sweltering heat during smuggling attempt in Texas was charged in US federal court on Wednesday with human trafficking charges. An accused conspirator faces the same charge. Each of them faces a maximum sentence of life in prison if convicted. There is even a possibility of death penalty. The migrant trafficking incident has been the deadliest such incident on record in the US. The death toll in the incident rose to 53 on Wednesday. The truck carried migrants from Mexico, Guatemala and El Salvador. The truck was found abandoned on Monday in desolate, industrial area near a highway on outskirts of San Antonio, Texas.

The temperatures in the area on that day had soared to 103 Fahrenheit (39.4 Celsius). Officials who arrived at the scene did not find any water supply or even signs of working air-conditioning inside the vehicle.

Officials described finding the rear door to the trailer ajar with "stacks of bodies" inside, many of them hot to the touch. Other victims were discovered on the ground nearby, some deceased, some incapacitated. It was not made clear from official accounts how the door opened.

According to radio dispatch audio from authorities who were first on the scene, no one inside the trailer was conscious and only about a dozen appeared at first to be breathing.

The truck's alleged driver, Homero Zamorano Jr, 45, a Texas native who was arrested near the scene, was charged in a criminal complaint with one count of "alien smuggling resulting in death," according to the Justice Department.

San Antonio police officers found Zamorano hiding in the brush, according to federal prosecutors. Francisco Garduno, head of Mexico's National Migration Institute, told a news conference earlier on Wednesday the driver had "tried to pass himself off as one of the survivors" when he was detained.

A second suspect, Christian Martinez, 28, was arrested on Tuesday and charged with a single count of "conspiracy to transport illegal aliens," the Justice Department said in its statement. His nationality was not immediately revealed.