Testimony from two of Trump's Ukraine policymakers to become public 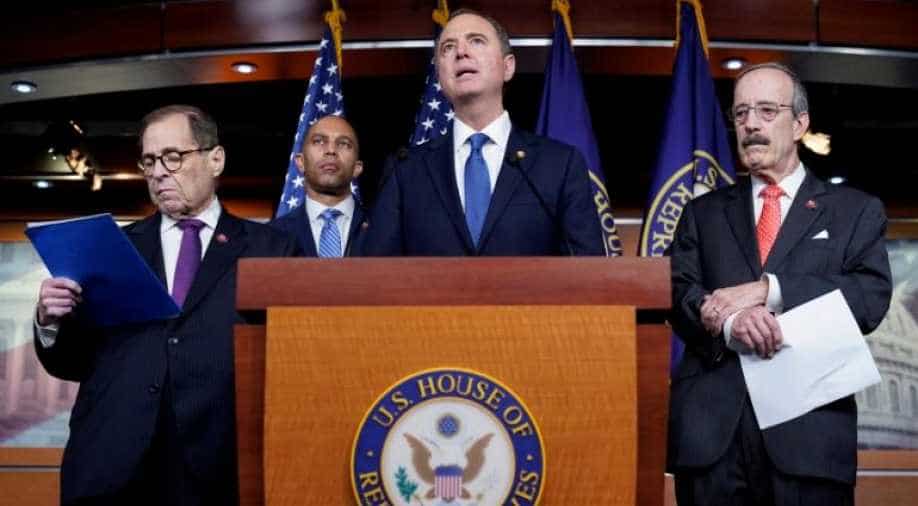 Schiff and Nunes are considered likely to give at least part of their time to committee lawyers who have conducted much of the questioning to date in hearings held behind closed doors. Once these rounds of questioning are finished, the committee will return to the usual House committee hearing format, with each lawmaker getting five minutes of questioning, alternating between parties. Photograph:( Reuters )

Witnesses have testified that Volker and Sondland, with Rick Perry, were known as the "three amigos," responsible for Trump's unofficial channel to Ukrainian government officials.

Testimony by two of the "three amigos" charged with running Ukraine policy for President Donald Trump will be made public on Tuesday, as Democratic-led congressional committees release more transcripts from their impeachment investigation.

Representative Adam Schiff, chairman of the House of Representatives Intelligence Committee, told reporters on Monday that transcripts would be released of interviews with Kurt Volker, Trump's former special representative for Ukraine negotiations, and Gordon Sondland, the US ambassador to the European Union.

Witnesses have testified that Volker and Sondland, with Trump's secretary of energy, Rick Perry, were known as the "three amigos," responsible for Trump's unofficial channel to Ukrainian government officials.

Volker resigned as special representative in September. He testified to the House Foreign Affairs, Intelligence and Oversight panels for more than eight hours behind closed doors on October 3.

Perry, a former Texas governor who said he was resigning from his Cabinet post as of December 1, has refused to date to testify.

Tuesday's will be the second public release of testimony in the impeachment investigation of Trump that Democratic House Speaker Nancy Pelosi formally launched on September 24.

On Monday, the committees released transcripts of testimony by Marie Yovanovitch, whom Trump abruptly recalled as ambassador to Ukraine in May, and Michael McKinley, a former top adviser to Secretary of State Mike Pompeo.

In their interviews, Yovanovitch and McKinley said the State Department was being used for domestic political purposes under Trump and warned that would hurt American interests.

Trump froze nearly $400 million in US military assistance to Ukraine shortly before speaking to Zelenskiy, prompting accusations from Democrats that he had misused US foreign policy for personal gain.

Strongly backed by his fellow Republicans in Congress, Trump has denied wrongdoing and accused Democrats of unfairly targeting him in the hope of reversing his surprise election victory in 2016.

The committees began releasing interview transcripts as they prepare for public hearings that could start this month.

According to accounts of their testimony already public, both Sondland and Volker discussed communications between Trump's private attorney, Rudy Giuliani, and Ukrainian officials with House investigators.

Volker turned over text messages concerning Ukraine among himself, Giuliani and other diplomats.

Sondland testified that Trump directed him, Perry and Volker to talk to Giuliani about his concerns about corruption in Ukraine and that the three were dismayed by that order.

He said he did not understand "until much later" that Giuliani's agenda included a push for Ukraine to investigate Biden. Sondland also said it would be wrong to get a foreign government to launch investigations in order to influence a U.S. election.

The committees have also scheduled more closed-door testimony on Tuesday from Michael Duffey, associate director of the White House budget office, and Wells Griffith, senior director for international energy and the environment on the White House National Security Council.

Officials have said they do not expect either to appear, after four White House witnesses failed to testify on Monday.

Schiff said the failure of the witnesses to show up was more evidence against Trump. "This will only further add to the body of evidence on a potential obstruction of Congress charge against the president," Schiff told reporters.