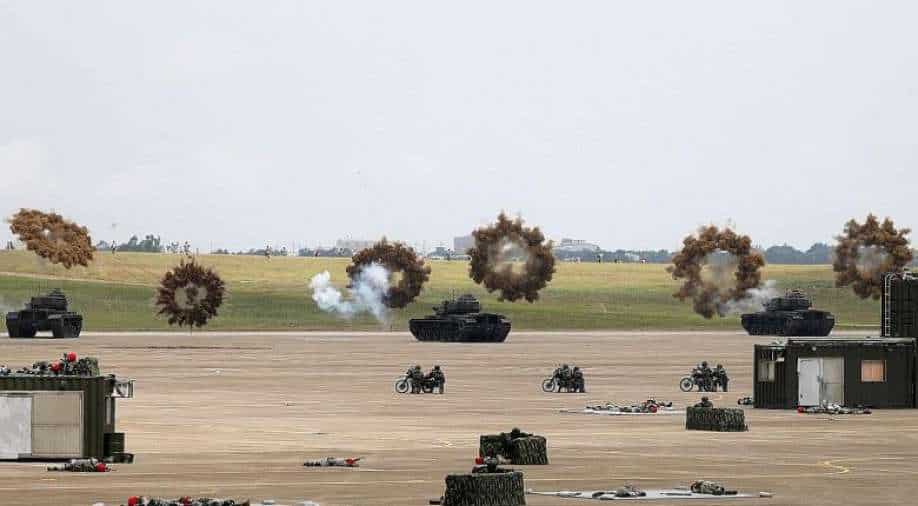 Hukou base lies in Hsinchu county, a centre for Taiwan's high-tech industries that have thrived despite the constant threats of invasion by China, which considers the self-governing island democracy part of its own territory to be conquered by force if necessary

Taiwanese troops using tanks, mortars and small arms staged a drill on Tuesday aimed at repelling an attack from China, which has increased its threats to reclaim the island and its own displays of military might.

''No matter what is happening around the Taiwan Strait, our determination to guard our homeland will never change,'' said Maj. Gen. Chen Chong-ji, director of the department of political warfare, about the exercise at Hukou Army Base south of the capital Taipei.

Chen said the exercise was intended as a show of Taiwan's determination to maintain peace between the sides through a show of force.

The drills are also meant to reassure the public the military is maintaining its guard ahead of next month's Lunar New Year festival when many troops take leave.

Hukou base lies in Hsinchu county, a centre for Taiwan's high-tech industries that have thrived despite the constant threats of invasion by China, which considers the self-governing island democracy part of its own territory to be conquered by force if necessary.

Taiwanese President Tsai Ing-wen has sought to bolster the island's defences with the purchase of billions of dollars in weapons from key ally the US, including upgraded F-16 fighter jets, armed drones, rocket systems and Harpoon missiles capable of hitting both ships and land targets.

She has also boosted support for the island's indigenous arms industry, including launching a program to build new submarines to counter China's ever-growing naval capabilities.

China's increased threats come as economic and political enticements bear little fruit, leading it to stage war games and dispatch fighter jets and reconnaissance planes on an almost daily basis toward the island of 24 million people, which lies 160 kilometres (100 miles) off China's southeast coast across the Taiwan Strait.

Along with the world's largest standing military, numbering around 2 million members, China has the largest navy, with approximately 350 vessels, including two aircraft carriers and about 56 submarines. It also possesses around 2,000 combat fighters and bombers and 1,250 ground-launched ballistic missiles, considered a key strategic and psychological weapon against Taiwan.

Taiwan's armed forces are a fraction of that number, with much of its ground force consisting of short-term conscripts, and its fleet numbers only around 86 vessels, roughly half of the missile boats for coastal patrol.