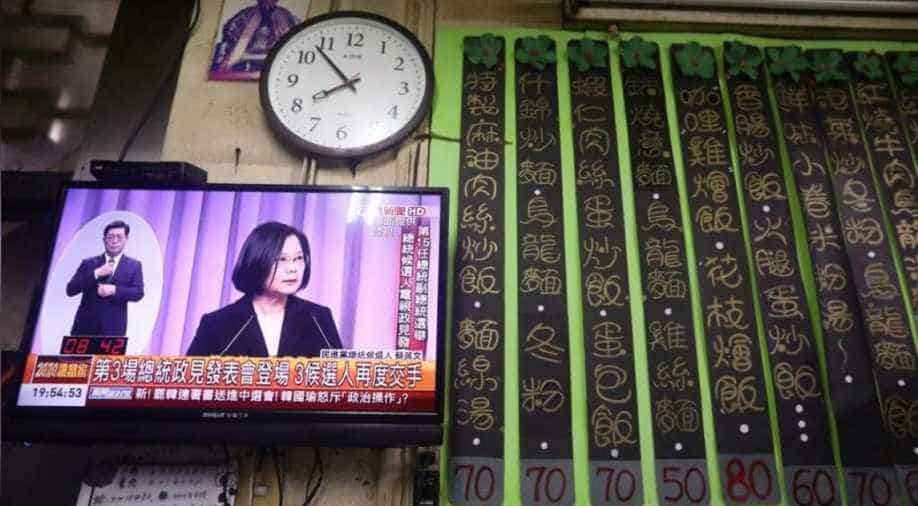 Taiwan President Tsai Ing-wen is seen on a TV screen during the third live policy address ahead of January's election, in Tainan, Taiwan, December 27, 2019. Photograph:( Reuters )

As over 200 countries around the world are battling the deadly virus, Taiwan is one of the success stories which contained the outbreak within time.

Amid the coronavirus pandemic, China's continuous influence over the World Health Organisation has exposed its several loopholes. The same can be seen it its latest response to Taiwan.

As over 200 countries around the world are battling the deadly virus, Taiwan is one of the success stories which contained the outbreak within time.

However, the WHO has refused to recognise the country's efforts which have been otherwise lauded by the rest of the world.

Earlier this year, China blocked Taiwan out of the WHO due to its internal conflict with the East Asian country.

China stakes claim over Taiwan. It sees Taiwan as a breakaway province.

Even, during the crucial times like this deadly coronavirus pandemic, Taiwan is excluded from emergency meetings at the WHO.

Taiwan does not get important briefings from global experts while it neither invited to the WHO annual meetings.

Given WHO's record on coronavirus, there is not much that Taiwan is missing and perhaps because of this lack of access, the country has been ahead of the curve.

Taiwan was the first to alert the WHO about the coronavirus outbreak.

Taiwan had sent the first warning in December itself during which it warned about human-to-human transmission. However, the wanings were ignored.

The Taiwanese government says the WHO's China bias made it blind to the threats..

Now, the arch-enemy of China has levied a serious charge as it claimed that WHO is burying reports regarding information that could be critical to the fight against the pandemic.

When the world is fighting this pandemic, Taiwan says it should not be left out.

The Taiwanese government cites its successes in controlling the outbreak as it said that it wants to contribute to the global effort.

However, China is constantly creating a hurdle for Taiwan by not only denying access to global forums, it also trying to browbeat the media when Taiwan's case is presented.

On Monday evening, the Chinese embassy in New Delhi released this statement in which it slammed India media for reporting on Taiwan's demands for WHO membership.

In the statement, China said, "Taiwan has no right to join the WHO".

The embassy also asked journalists to follow the One-China principal.

Meanwhile, as the pressure continued to mount, WHO also released a statement where it emphasized that it is working with all health authorities including "health experts from Taiwan".

The number of confirmed cases of coronavirus topped, 800,000 on Tuesday and amidst this, WHO is taking a huge risk by keeping Taiwan out.

While the other countries are struggling, Taiwan has saved lives without the support of global bodies.

WHO must end this unfair boycott, at least in times of such an emergency.