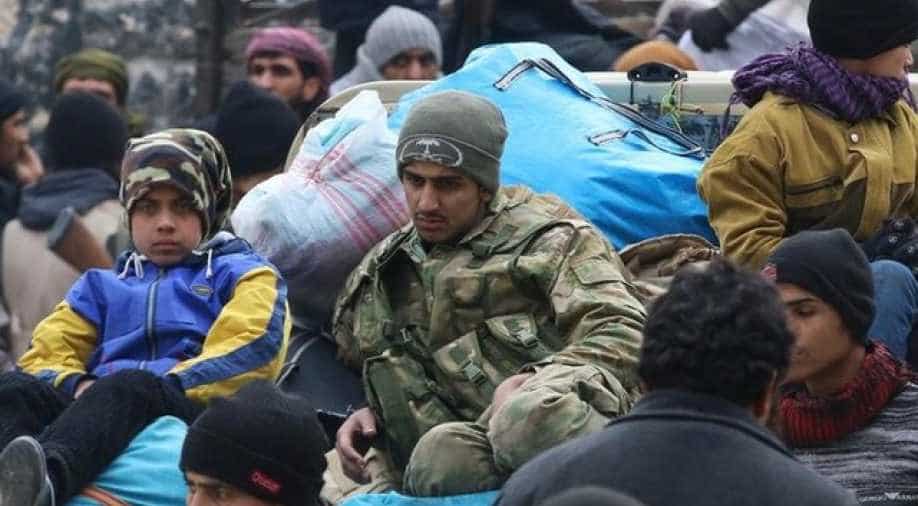 Rebel fighters and civilians gather as they wait to be evacuated from a rebel-held sector of eastern Aleppo, Syria. Photograph:( Reuters )

A new deal has been reached to complete the evacuation of rebel-held areas of east Aleppo which had stalled over demands from pro-government forces that two villages besieged by rebels also be evacuated, a Syrian rebel told news channel al-Arabiya al-Hadath on Saturday.

Rebel official al-Farouk Abu Bakr, speaking from Aleppo, said the deal comprised an evacuation from the two Shi'ite villages besieged by insurgents, the evacuation of wounded people from two towns besieged by pro-government forces near the Lebanese border, and the full evacuation of rebel-held eastern Aleppo.

The villages of al-Foua and Kefraya in Idlib province are besieged by insurgents. The towns of Madaya and Zabadani are blockaded by pro-government forces.

On Friday, the second day of the operation to evacuate fighters and civilians from the last opposition-held area of Aleppo was suspended after pro-government militias demanded that wounded people also be brought out of al-Foua and Kefraya, and protesters blocked the road out of Aleppo.

The chaos surrounding the Aleppo evacuation reflects the complexity of Syria's civil war, with an array of groups and foreign interests involved on each side.

Rebel sources said pro-government Shi'ite militias had detained and opened fire on a convoy carrying evacuees from east Aleppo on Friday. A Syrian military source denied the accusations but said the convoy was turned back to Aleppo.

Abu Bakr told al-Hadath the previous agreement was breached on Friday by pro-government militias who detained "hundreds" of people trying to leave, leading to some deaths.

"Now we are working on international guarantees to guarantee the safety of those who leave Aleppo so that such violations are not repeated," he said.

A Syrian rebel source said Jabhat Fateh al-Sham, formerly known as the Nusra Front, had not initially agreed to the evacuation of the two villages. The source later said Nusra had agreed, but a Nusra source denied this.

The Syrian Observatory for Human Rights, which monitors the war, said no busses or ambulances had yet entered al-Foua or Kefraya, but the operation was expected to begin soon.

Another rebel official confirmed to Reuters that a deal on the evacuation of Aleppo, al-Foua and Kefraya had been reached and that it should go ahead.

Officials from the Syrian government or the military alliance fighting in support of it could not be reached for immediate comment.

Abu Bakr did not say how many people would be evacuated from al-Foua and Kefraya.

The Observatory said the villages contain about 20,000 civilians and roughly 4,500 pro-government fighters.