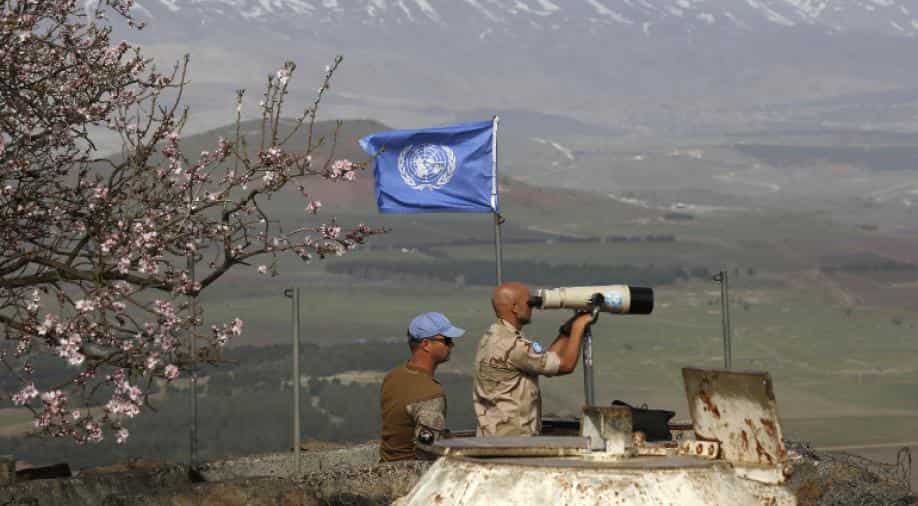 UN members look through binoculars as they monitor the Israel-Syria border in the Israeli-annexed Golan Heights. Photograph:( AFP )

Moscow announced on Monday it would deliver the advanced S-300 air defence system, a week after the Syrian military downed a Russian plane by mistake following an Israeli air strike.

A top Syrian official has said a new air defence system from ally Russia will force Israel to "think carefully" before carrying out any more air strikes in the country.

Moscow announced on Monday it would deliver the advanced S-300 air defence system, a week after the Syrian military downed a Russian plane by mistake following an Israeli air strike.

Russia has blamed the friendly fire on Israeli pilots using the larger Russian plane as "cover".

It replaces Syria's existing Russian-built S-200 system, which dates back to the Soviet era, in a move that had been due to take place in 2013 but was held up by Russia at Israel's request.

"I think that Israel, which is accustomed to carrying out many attacks under different pretexts, will have to think carefully about attacking Syria again," Meqdad said.

In recent years, Israel has carried out repeated air strikes in war-torn Syria against Iranian targets and what is says are advanced arm deliveries to Lebanese Shiite militant group Hezbollah.

Iran and Hezbollah are allies of President Bashar al-Assad in the seven-year civil war.

"Let the Israelis try, we will defend ourselves as we always do," the state SANA news agency quoted Meqdad as saying.

The downing of the Russian plane late Monday last week killed all 15 soldiers on board, after an Israeli plane targeted a military position in the northwestern province of Latakia.

The accident was the deadliest friendly fire between Syria and Russia since Moscow's game-changing military intervention in the war in 2015.

More than 360,000 people have been killed and millions displaced since the conflict erupted in 2011 with the brutal repression of anti-government protests.

Trump, Biden to hold rallies in key states on final weekend before election