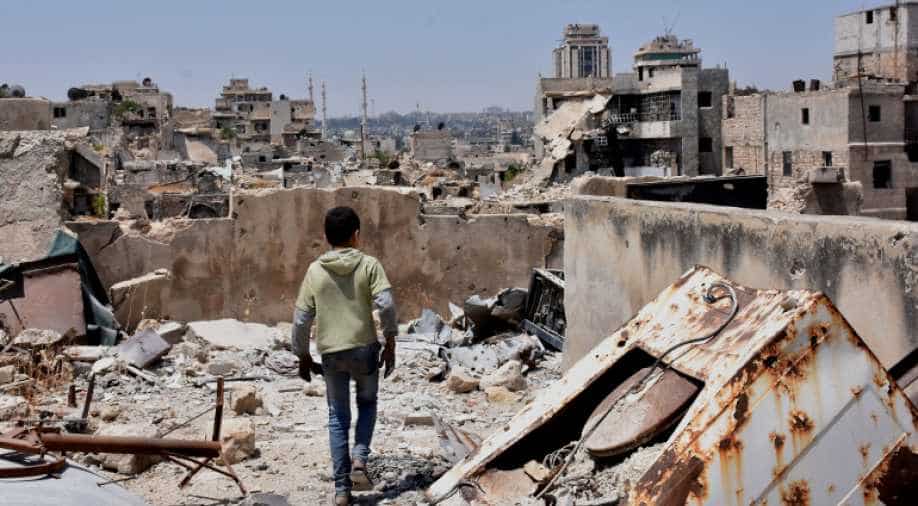 Syria`s conflict erupted in 2011 with anti-government demonstrations, but it has since morphed into a complex war drawing in world powers, including Russia. Photograph:( AFP )

More than three dozen Syrian rebel groups, including influential Islamists, have rejected a Russian-led initiative for talks next month in Sochi on ending Syria's war.

Russia and Iran, both key allies of Syria's regime, agreed with opposition backer Turkey on Friday to hold a "Congress of National Dialogue" in the Black Sea resort of Sochi on January 29 and 30.

Syria's government swiftly said it would attend but rebels have pushed back, calling it a Russian bid to eclipse a United Nations-led process in Geneva.

"We completely reject Russia`s attempt to circumvent the Geneva track," the rebels said in a joint statement published Monday.

"We call on all forces to stand in one rank against these alarming dangers."

It was signed by 40 factions, including Islamist powerhouse Ahrar al-Sham and groups that have been backed by the United States such as the Mutasem Brigades.

Some of the factions played a significant role in the rebellion since the war broke out in 2011 but most have either been sidelined by other groups or control only small pockets of land.

Mustefa Sejari, a top Mutasem Brigades figure, told AFP on Tuesday that rebels could not see Russia as an honest broker.

"From the beginning, we said whoever wants to play an intermediary and guarantor role in Syria needs to be neutral, fair, and honest in its support of political transition," Sejari said.

"Russia has not done these things -- it is a partner in the killing of the Syrian people," he added.

Syria's conflict erupted in 2011 with anti-government demonstrations, but it has since morphed into a complex war drawing in world powers, including Russia.

Repeated attempts to reach a political solution to the war have failed, with the UN-backed process in Switzerland bearing little fruit.

Russia, Turkey, and Iran began hosting talks between Syria's government and armed rebels in Kazakhstan earlier this year, and announced the Sochi conference at the most recent round last week.

The United Nations has yet to firmly endorse the summit, and opposition representatives have largely been wary of it.

Syria's Kurds, which run semi-autonomous regions across the country`s north, welcomed the Sochi initiative on Tuesday.

"We have a right to take part and represent our people in it," said the statement, signed by Kurdish and Christian parties as well as an alliance including the powerful Democratic Union Party (PYD).

The PYD and its armed wing, the People's Protection Units (YPG), have never been invited as a separate delegation to Syrian peace talks in Geneva or Astana.

Turkey considers the PYD a "terrorist" organisation because of its links to the outlawed Kurdistan Workers` Party and has said it would oppose any talks involving the PYD.

But even if the debate over attendees is resolved, the main stumbling block over any political solution remains the fate of Syrian President Bashar al-Assad, with much of the opposition sticking firm to calls for his ouster.