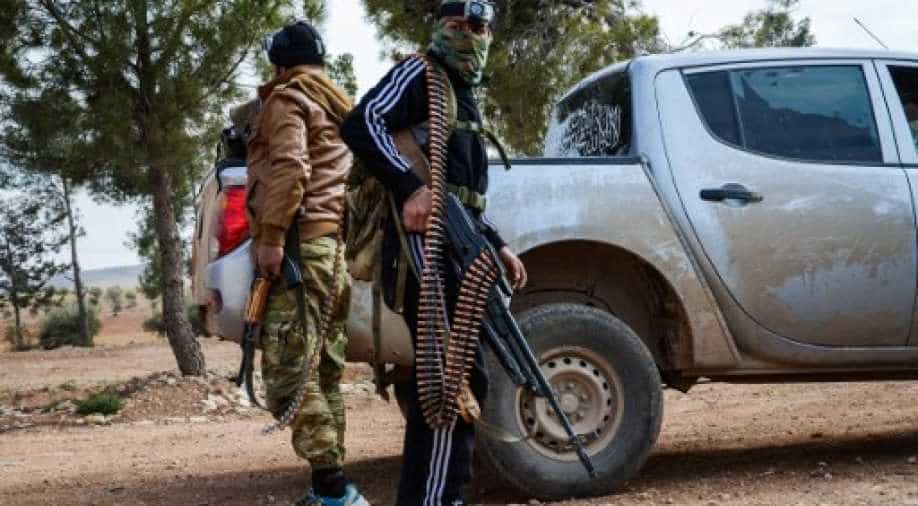 Al-Bab is now completely besieged by the regime from the south, and the Turkish forces and rebels from the east, north and west. (Representative image) Photograph:( AFP )

The Islamic State group is "completely besieged" in its last major stronghold in Syria's Aleppo province, a monitor said Monday, as pro-regime forces pressure the jihadists on several fronts.

IS fighters were cut off in Al-Bab after forces loyal to President Bashar al-Assad's government severed a road into the northern town, the Syrian Observatory for Human Rights reported.

"Al-Bab is now completely besieged by the regime from the south, and the Turkish forces and rebels from the east, north and west," said the Britain-based monitor.

At least 11 pro-government fighters were killed in ongoing clashes around Al-Bab on Monday, he added.

Just 25 kilometres (15 miles) south of the Turkish border, the town is seen as a prize by nearly all sides in the complex war.

Since December, Turkey-backed rebels known as the Euphrates Shield alliance have edged towards Al-Bab from the north.

"Al-Bab is more important for the Turks, who defined the town as a priority for their Euphrates Shield alliance," said Syria expert Thomas Pierret.

But the regime was eyeing territory around Al-Bab "to protect the eastern flank of Aleppo city" which it recaptured in December, he said.

It also sought to use the town as a buffer, "preventing the Euphrates Shield from advancing south" deeper into Syria.

Turkey and Russia back opposing sides in the war, but have joined forces in recent months to try to end to the conflict.

The two powers carried out their first joint bombing raids around Al-Bab in January after brokering a fragile ceasefire between rebels and regime forces.

Along with Iran, they organised a summit in Kazakhstan in a bid to reinforce that truce ahead of fully fledged peace talks in Geneva later this month.

Those negotiations, hosted by UN special envoy for Syria Staffan de Mistura, are the latest attempt to stop the six-year conflict.

Several rounds of indirect talks in 2016 between the regime and the opposition, represented by the High Negotiations Committee, fizzled out without notable progress.

On February 12, the HNC will announce the members of its delegation to this month's talks, the leading Istanbul-based National Coalition said Monday.

The main obstacle to progress in previous rounds has been the fate of Assad, who opposition forces say must leave power at the start of any transition period.

On Monday, Assad told visiting Belgian parliamentarians that Western policies towards the conflict in his country had actually hurt Europeans.

"Most European countries adopted an unrealistic policy since the beginning of the war in Syria... damaging the interests of their own people by supporting terrorist groups," he said.

Assad's regime has refocused on IS since fully recapturing Aleppo city in December, in the biggest blow to rebels battling to topple his regime.

IS is among several jihadist movements that have shot to prominence during the conflict, which has left more than 310,000 people dead and forced millions more from their homes.

Assad's forces were also locked in fighting with IS in the central province of Homs on Monday that left at least 14 government fighters dead, the Observatory said.

They had capturing the Hayyan oilfield west of the celebrated desert city of Palmyra at the weekend and were seeking to advance backed by heavy artillery and air strikes.

The United Nations said on Monday IS was "militarily on the defensive" across the region, struggling to attract recruits and facing a drop in revenue from oil and exortion.

But the UN report urged governments to be vigilant of IS efforts to find new revenue streams, citing concerns that journalists and aid workers travelling to areas recaptured from the jihadists could be targets for kidnapping.

On Saturday, US-backed Kurdish and Arab fighters announced a new phase in their campaign to capture Raqa, but said they needed more weapons to win.

The Syrian Democratic Forces began their offensive for the jihadist stronghold in November and have taken some ground further up the Euphrates Valley but are still some distance away.

SDF fighters have received training and air support from the US-led coalition against IS. Last week Washington said it had supplied them with armoured sports utility vehicles for the first time.

US President Donald Trump, who made fighting "radical Islamic terrorism" a central plank of his election campaign, was due to visit US Central Command on Monday, meeting officers who will spearhead his new strategy to defeat IS.