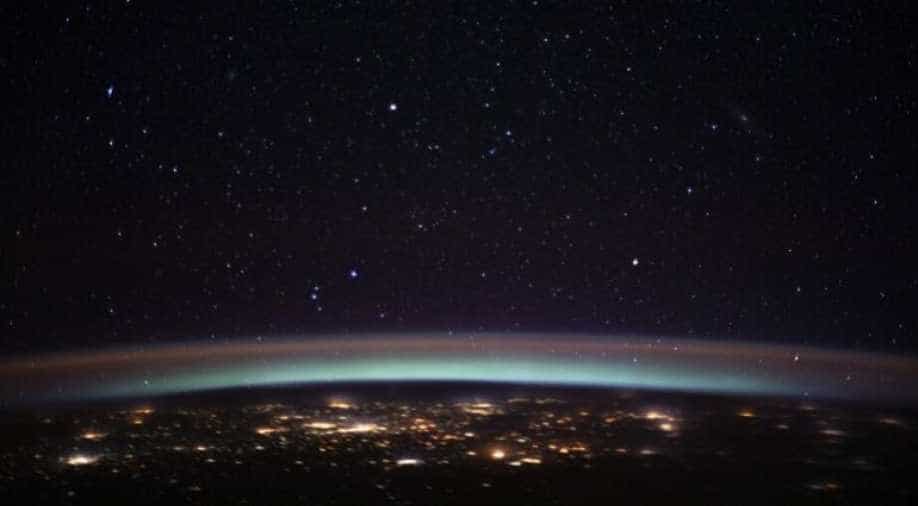 This NASA image obtained March 24, 2020 shows the city lights at the intersection of Europe and Asia Photograph:( AFP )

As the coronavirus pandemic grips the world, several countries are under a lockdown and people have been confined to their homes.

More than 3 billion of the world's population has been completely cut-off from each other.

Until the world collectively flattens the coronavirus curve, as South Korea was able to, things are expected to stay the same.

As isolation takes a toll on people, we bring to you narratives of those who have had to live in isolation for a long time: astronauts!

"Do things that scare you!"

An astronaut has now made a video giving people tips on how to deal with enforced social isolation.

“Do engage in things which scare you, dig into them and become an expert”.

A retired astronaut, Chris Hadfield, 60, who authored the book “An astronaut’s guide to life on earth” had this to say:

"I'm watching how this pandemic is influencing this group dynamic. And I feel, as one of many people with a public voice, that it's important, then to try and recognise that and help people recognise that also and try to give people some tools to deal with it", he said.

He further added, "to be isolated for a long time can be sort of frightening. Because you don't know what to expect. And whenever I’m frightened I try and really dig into the actual risks, the actual dangers. Become an expert on the thing that is scaring me. And that helps me deal with my natural fear".

Hadfield further said this is the time for one to master new skills, like playing the guitar, or learning a new language.

However, he believes that the best thing one can do right now is taking care of themselves and their families.

"Once you understand the risk, your mission, your sense of purpose, and your obligations, then take action. Start doing things. They don't have to be the things that you always did before. Take care of family, start a new project, learn to play guitar, study another language, read a book, write, create", he said on his YouTube channel.

Nick Hague, an astronaut with NASA has spent several months on board the International Space Station. He drew parallels between being locked down and being on the space station.

His mantra is simple - have a routine!

“It's simple stuff. It's to have a routine, you know, put a schedule together and stick to the schedule, because then everybody inside the house knows what to expect throughout the day. And just having some control and some certainty over how your day is going to play out is a huge psychological boost", he said.

"You know, and then the other part is at the end of the day or whenever we need it just trying to to have a place that is your own that you can sneak away to and you can have a little personal time. You know, the space station is as big as a six person home. And we have our own little crew quarters up there, which is about the size of a closet. But that's all I needed to be able to close the door and just kind of escape all the hustle and bustle and everything else that was going on and just focus on kind of trying to collect myself and my thoughts and being able to escape. And so having that personal space, that personal time is super important, too”, he said.

But at the same time Hague emphasises the need to talk, to express and to communicate and try and understand one's family members.

Here’s what Hague had to say on how not to annoy people who are living with you during a lockdown.

"Yeah, you know, and I'd argue that you know, the people that are closest to us, the family, the loved ones, we know exactly how to annoy them. You know what their buttons are. And so it's really just trying to understand, you know, everybody is going through this. And so the key is communication. Express how you're feeling and listen to others, express how they're feeling and just being able to be open and talk about what everybody's going through. We'll let you identify the support that you need and the support that you need to give. And that's just going to make it so much easier. So talk. Don't bottle things up", he said.