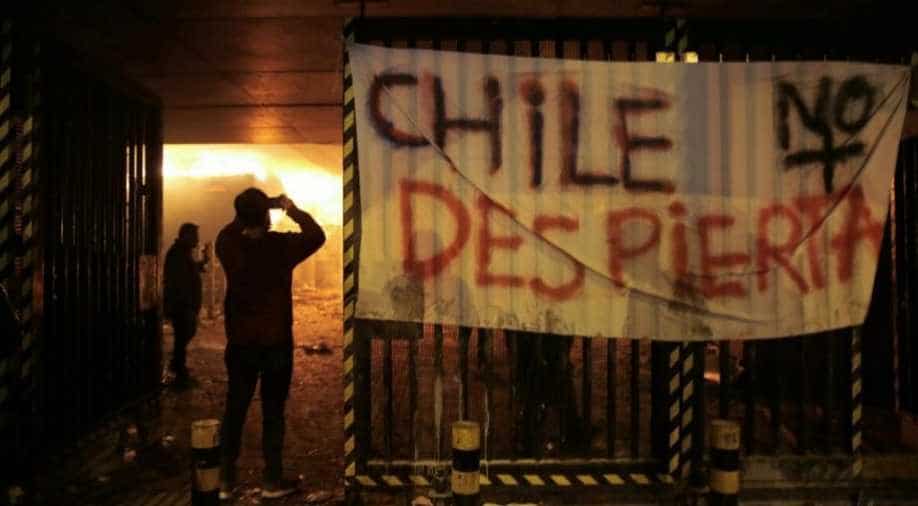 People take pictures of Macul Metro station set on fire by protesters alongside a sign that reads "Chile doesn't wake up" during a mass fare-dodging protest in Santiago. Photograph:( AFP )

The poll came just before a rally that saw 1 million Chileans, or just under one-fifth the city's population, take to the streets Friday to call for reforms.

Support for Chile's Sebastian Pinera has plunged to just 14per cent amid recent unrest, according to a poll published on Sunday, the lowest approval rating for a Chilean president since the country's return to democracy three decades ago.

The survey, published in local daily La Tercera, was conducted by Chilean pollster Cadem between Wednesday and Thursday. It came just before a rally that saw 1 million Chileans, or just under one-fifth the city's population, take to the streets Friday to call for reforms to the country's social and economic model.

Daily La Tercera called Pinera's 14per cent approval rating a "historical minimum," and the lowest since the 1973-1990 military rule of dictator Augusto Pinochet. More than three-quarters of Chileans disapproved of the centre-right Pinera's administration, the poll found.

Chile, the world's top copper producer, has long been one of the region's most prosperous and stable free-market economies. But entrenched inequality and spiralling costs of living ignited massive, and sometimes violent, protests last week.

Similar scenes have played out in cities across the world in recent months, from Hong Kong to Beirut to Barcelona, sharing in common anger at ruling elites.

In Chile, a hike in subway fares more than a week ago proved the breaking point. Small protests quickly boiled over into riots that have killed at least 17 people, resulted in more than 7,000 arrests and caused upwards of $1.4 billion in losses to Chilean businesses.

Pinera, a billionaire businessman, last week called for a new "social pact," to stem the unrest. He promised higher taxes on the rich to help boost the minimum wage and pensions, lower the prices of medicines and assure proper health insurance.

The Cadem poll found that 80 per cent of Chileans did not think his reforms were adequate.

"We will see how the government plays the last few cards it holds to confront this new scenario," Izikson said.

The centre-right Pinera trounced the leftist opposition during 2017 elections. But mass rallies forcing Pinera to change his tone and upend his policy goals.

On Saturday, Pinera promised a major cabinet shake-up, though he has yet to announce details.