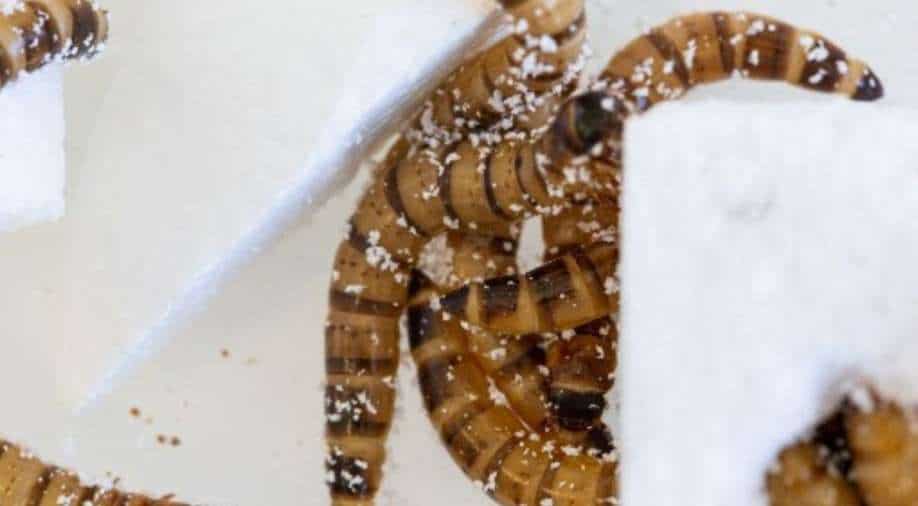 Superworms usually tend to group up to five centimeters, and in countries such as Thailand and Mexico, these worms are bred as a food source for reptiles, birds, or even humans. Photograph:( AFP )

A study by scientists from the University of Queensland, Australia, has found that superworms, the larvae of Zophobas Morio darkling beetles, are eager to consume Polystyrene, which is among the most common forms of plastic. The study found that the gut enzymes of these worms could potentially become the key to higher plastic recycling rates, reports AFP news agency.

Superworms usually tend to group up to five centimetres, and in countries such as Thailand and Mexico, these worms are bred as a food source for reptiles, birds, or even humans.

Also read | Is it a warning? Microplastics breach another frontier, now found in freshly fallen snow in Antarctica

The study was published in the journal Microbial Genomics on Thursday. Chris Rinke, who was leading the study, told AFP that the worms had an impressive performance history when it came to feeding on plastic.

The team of scientists also attempted to find which gene-encoded enzymes of the worms were involved in degrading the plastic and analyze the microbial gut community using a technique called metagenomics.

Watch | 20,000 tons of Plastic flows through Las Vacas each year

During the course of the study, Rinke and his team fed superworms over a three-week period with different diets. Some worms were given polystyrene foam, also known as styrofoam, a few were given bran, and others were not given anything.

"We confirmed that superworms can survive on a sole polystyrene diet and even gain a small amount of weight compared to a starvation control group, which suggests that the worms can gain energy from eating polystyrene," AFP quoted Chris Rinke as saying.

The findings of the study suggest that while superworms can survive on Polystyrene and complete their life cycles as adult beetles, tests reveal that it could result in a loss of microbial diversity in their guts and potential pathogens.

The findings of the study can be put to use by providing superworms with food waste or agricultural bioproducts to be consumed alongside Polystyrene, Rinke told AFP.

"This could be a way to improve the health of the worms and to deal with the large amount of food waste in Western countries," he added.

Also read | 'Threatened snake': How jumping worms are causing havoc in US

Although breeding more superworms for the purpose of up-cycling is possible, Rinke holds another plan which involves creating recycling plants that have the ability to replicate what the larvae do, that is, firstly shredding the plastic in their mouths and then ultimately digesting it through enzymes.

"Ultimately, we want to take the superworms out of the equation," AFP quoted Rinke. Rinke plans to research more regarding the most efficient enzymes to enhance them further through enzyme engineering.

The scientists envision that the breakdown products from these enhanced enzymes can later be fed to other microbes, which can potentially create high-value compounds, such as bioplastics, which they hope would become an economically viable approach to up-cycling.