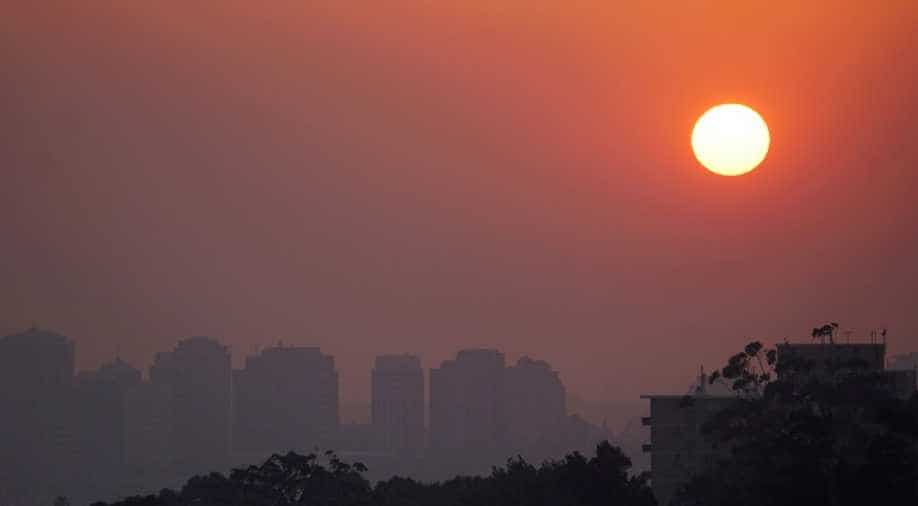 High-rise buildings are seen through smoke from bushfires during sunset in Sydney, Australia, November 11, 2019. Photograph:( Reuters )

Millions of people across two states are subject to a seven-day state of emergency that was imposed by officials on Monday, with locals in areas deemed most at risk urged to evacuate before the worst hits.

Residents across a wide swath of Australia's east coast were bracing for "catastrophic" conditions on Tuesday, with searing heat and high winds expected to fan scores of already burning bushfires, threatening residential areas.

Millions of people across two states are subject to a seven-day state of emergency that was imposed by officials on Monday, with locals in areas deemed most at risk urged to evacuate before the worst hits.

"We really need people to stay alert, stay informed, and stay safe and act in accordance with your plan and the advice that might be given out throughout the day," NSW Rural Fire Service Commissioner Shane Fitzsimmons told reporters.

Sydneysiders woke up to a city shrouded in smoke. Officials have rated the harbour city at "catastrophic fire danger" for Tuesday, the first time it has received that designation since new fire danger ratings were introduced in 2009.

Home to more than 5 million people, Sydney is ringed by large areas of bushland, much of which remains tinder-dry following little rain across the country's east coast in recent months.

Bushfires are a common and deadly threat in Australia’s hot, dry summers, but the current severe outbreak - across several parts of New South Wales (NSW) and Queensland states, as well as Sydney - weeks before the summer peak, has caught many by surprise.

Lawmakers and firefighters in NSW, where temperatures were expected to reach 37 degrees Celsius (98.6 degrees Fahrenheit) said they were prepared, but warned there was only so much they could do.

"We are planned, we are escalated to a high level of standby and readiness," Fitzsimmons said.

There were 54 fires ablaze across the state, around half of which were uncontained, Fitzsimmons said, adding around 3,000 firefighters were deployed or on standby.

"We are not going to control fires under catastrophic conditions," he said. "They have the ability to develop and grow extremely quickly and develop into very large fires."

Seeking to avoid deaths, firefighters have been given broad powers to control government resources, force evacuations, close roads and shut down utilities.

Around 600 schools and colleges were closed as a precaution and authorities advised anyone suffering respiratory conditions to stay indoors.

In Queensland state, the danger was not quite as great, with the threat level pegged at "severe", two levels below the "catastrophic" conditions in NSW. Still, some 22 fires were burning across the northern state.