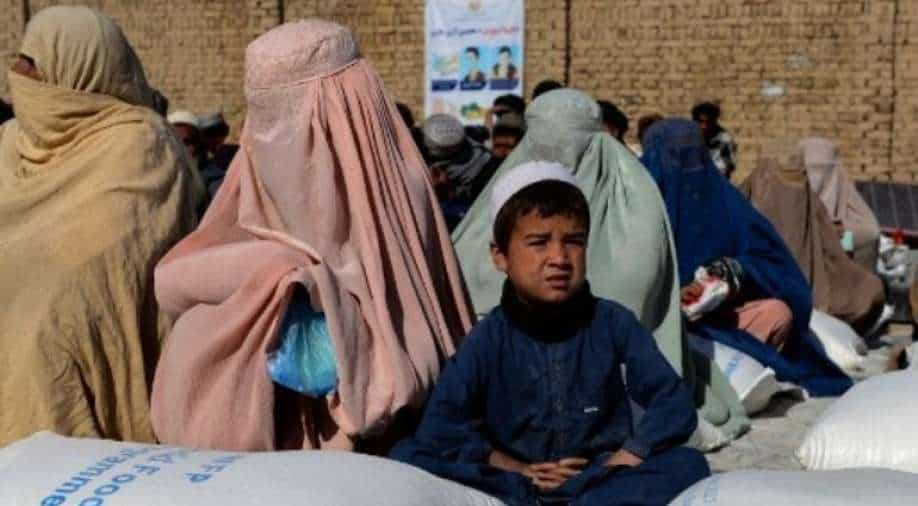 Afghan people sit besides sacks of food grains distributed as an aid by the World Food Programme (WFP) in Kandahar, Afghanistan. According to the United Nations, around 22 million Afghans, or more than half of the country, will experience a severe food shortage this winter as a result of drought caused by global warming and an economic crisis aggravated by the Taliban's takeover. Photograph:( AFP )

It is now estimated that to avert the famine worldwide, seven billion dollars are needed, up from the estimated 6.6 billion earlier in the year

A report by the UN food agency has revealed that as acute hunger spikes around the world, around 45 million people are living on the edge of famine in 43 countries.

Earlier this year, the World Food Programme (WFP) had pegged this number at 42 million. However, a recent assessment of food security found another three million people facing famine in Afghanistan.

"Tens of millions of people are staring into an abyss. We've got conflict, climate change and COVID-19 driving up the numbers of the acutely hungry," WFP Executive Director David Beasley was quoted as saying.

After a visit to Afghanistan, where the World Food Program is increasing assistance to almost 23 million people, he said: "The latest data show there are now more than 45 million people marching towards the brink of starvation,".

"Fuel costs are up, food prices are soaring, fertiliser is more expensive, and all of this feeds into new crises like the one unfolding now in Afghanistan, as well as long-standing emergencies like Yemen and Syria," he added.

Also read | I'll donate $6 billion if the UN can prove how it will solve world hunger: Elon Musk

It is now estimated that to avert the famine worldwide, seven billion dollars are needed, up from the estimated 6.6 billion earlier in the year. However, the WFP warns that traditional funding streams are overstretched.

The food insecurity in some areas is causing parents to make devastating choices like marrying off their children early, pulling them out of school, or feeding them locusts, wild leaves, or cactus.

"Meanwhile media reports from Afghanistan point to families reportedly being forced to sell their children in a desperate attempt to survive," it said.

Several droughts in Afghanistan were compounding an economic meltdown, pushing families to the edge.

Meanwhile, 12.4 million Syrians have no idea where their next meal will come from. According to the report, this is the highest number in the Syrian conflict's decade-long history.

In addition, Ethiopia, Haiti, Somalia, Angola, Kenya, and Burundi, have also witnessed an increase in acute hunger, reports the agency.