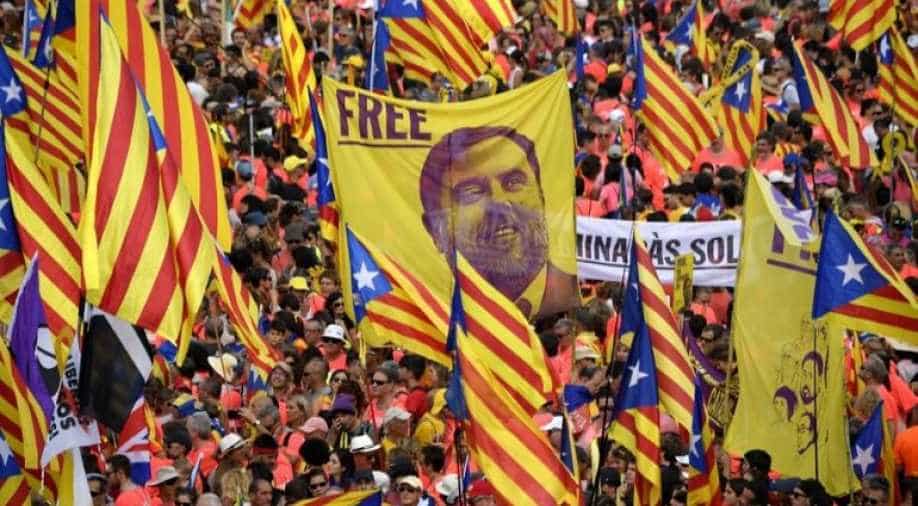 File Photo: Demonstrators hold a banner demanding freedom for Catalan jailed leader Oriol Junqueras as they gather to take part in a pro-independence demonstration in Barcelona, marking the National Day of Catalonia, the "Diada". Photograph:( AFP )

Junqueras was elected to the European Parliament in May while he was in jail awaiting the verdict in his case.

Spain's state attorney on Monday recommended the release of Catalan separatist leader Oriol Junqueras from prison in what was widely seen as a gesture of political goodwill as the Socialist Party seeks support to form a government.

The state attorney's office asked the Supreme Court to let Junqueras go to Brussels to take his seat as a European member of parliament. He was sentenced in October to 13 years in prison over his role in a failed 2017 bid for Catalan independence.

The European Union's top court said this month that Junqueras was entitled to immunity as an EU lawmaker. The Spanish Supreme Court is expected to give a ruling in coming weeks.

The state attorney's opinion was widely anticipated as the Socialists have been trying to persuade Junqueras' party, Esquerra Republicana de Catalunya (ERC), to back a Socialist-led government by abstaining in a parliamentary vote to confirm acting Prime Minister Pedro Sanchez as premier.

Spain has been in a political gridlock and without a proper government for many months after two inconclusive elections this year.

ERC's parliamentary spokeswoman Marta Vilalta said it considered the negotiations with the Socialists as an "opportunity for Catalan separatism," but any decision on facilitating Sanchez's confirmation will depend on the party's governing body which is scheduled to meet on Jan. 2.

"It is time to put in the hands of the (ERC) National Council the decision on whether the proposal we have received is enough for us to abstain in the investiture vote," she added.

The Spanish attorney also asked the European Parliament to strip Junqueras of immunity so that the case against him would not be completely dropped, but this would require a difficult-to-achieve majority among the 700-odd MEPs.

Junqueras was elected to the European Parliament in May while he was in jail awaiting the verdict in his case.

"This is not a gesture, but the fulfillment of legal requirements coming from European justice," ERC's Vilalta told reporters. "We are convinced that Spanish justice will abide by the ruling of the European Court of Justice."

The Spanish Socialist Workers' Party (PSOE) and ERC have been meeting regularly since a Nov. 10 election that saw the Socialists emerge as the winner but fall short of a majority in a fragmented parliament.

A rapid coalition deal with the far-left Unidas Podemos party brought their total seat count to 155, still short of the 176 seats needed for a majority. After the Basque nationalist party PNV, with six lawmakers, agreed to back the Socialist-led coalition, the 13 seats held by ERC are crucial.