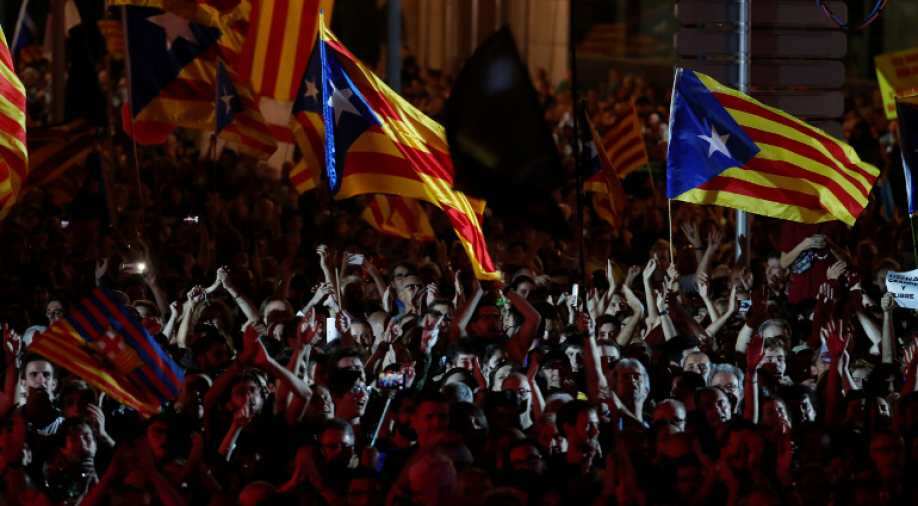 Catalan separatists were determined Saturday to press ahead with an independence referendum banned by Madrid, having occupied dozens of schools designated as polling stations to stop police from closing them down.

"In these hugely intense and hugely emotional moments, we sense that what we once thought was only a dream is within reach," Catalan leader Carles Puigdemont told a crowd of cheering supporters on Friday evening, as he closed his campaign for Sunday`s vote.

Over in the town of L`Hospitalet de Llobregat, though, a different scene played out in a large conference hall.

There, some 2,000 people who oppose separating from Spain rallied at a meeting called by Ciudadanos, Catalonia`s main opposition party.

The vote has stoked passions in the wealthy northeastern region, pitting Catalan leaders against the central government in one of the biggest crises to hit Spain since democracy was restored after the death of dictator Francisco Franco in 1975.

It has also sown divisions among Catalans themselves, with the region deeply split on independence, even if a large majority want to be allowed to settle the matter in a legal vote.

"There is nothing that justifies violating so basic a right as the right to vote," Omar Sanchis, a 29-year-old drama student, said from behind the railings of the Collaso i Gil school in Barcelona, which he and others had occupied.

Authorities in Madrid have instructed police to ensure no votes are cast in a referendum that the courts have ruled unconstitutional.

For days, they have been seizing electoral items such as ballot papers while prosecutors have ordered the closure of websites linked to the vote and the detention of key members of the team organising the referendum.

A court on Wednesday ordered police to prevent the use of public buildings "for the preparation and organisation" of the referendum.But those for the vote have mobilised.

On Friday, tractors paraded through Barcelona, some decked with the "Estelada", the separatists` flag of red-and-yellow stripes with a white star on a blue chevron.

They and firefighters have vowed to protect polling stations.

As classes ended for the day, small groups of activists, including parents with their children, decided to peacefully occupy several schools in Barcelona where voting is scheduled to take place.

The occupations appeared to be partly coordinated by a platform of "schools open for the referendum."

By midnight, it was still unclear exactly how many schools were occupied, but organisers said dozens had been taken over in Barcelona.

There were believed to be a lot more in the city and around the region, and the occupations were expected to continue throughout the weekend.

Over at the anti-independence rally, though, Dolores Molero, a 53-year-old secretary from Tarragona, a city further south, said the situation was "a dead end".

"They want to destroy the state, Spain and Catalonia," she said after a meeting that saw people wave Spanish and EU flags, as well as the "Senyera" -- the official Catalan flag of plain red-and-yellow stripes.Madrid has repeatedly warned those who help stage the referendum that they face repercussions.

On Friday, Spain`s education ministry said in a statement that head teachers in Catalonia "were not exempt from liability" if they cooperated.

But Jordi Sanchez, the president of the Catalan National Assembly, an influential pro-independence organisation, told AFP the court order said public spaces could not be used for the referendum on Sunday "but it did not say anything about leisure activities today and Saturday".

"We have proposed that citizens organise activities, that they put in place a lot of activities to give life to these spaces which on Sunday should host the referendum."

Catalan government spokesman Jordi Turull said there would be "2,315 polling stations all over the region" for the vote.

But Catalonia`s regional police force, the Mossos d`Esquadra, have warned of the risk of "disruption of public order" if they try to prevent people from casting ballots.

Madrid has sent thousands of extra police officers from other forces to Catalonia -- which accounts for one fifth of Spain`s economy -- to help stop the referendum.

Molero said she was worried about what would happen Sunday.